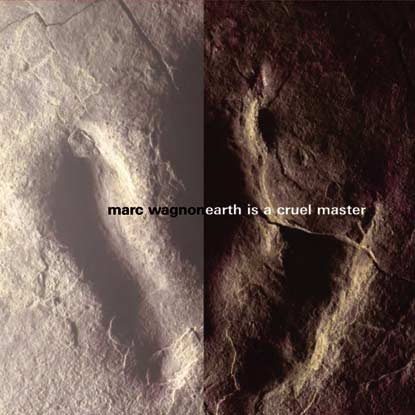 Swiss born vibraphonist / percussionist Marc Wagnon is probably best known as a member of Tunnels during their five-album run, or perhaps as a member of Doctor Nerve before that, but all through that time he has released several solo albums of his own compositions – Shadowlines from about a dozen or so years ago was one of these that I recall well. On Earth Is a Cruel Master, he is joined by guitarist Van Manakas, electric bassist Leo Traversa, and acoustic bassist Danny Stone, for an instrumental set that straddles the poles of jazz and electric jazz-rock, skillfully avoiding the two f-words. Wagnon plays everything else, including the drum kit, all mallet percussion and the occasional background synths (or are they mallets processed to sound like keyboards?), plus all the cool electronic effects that pop into the mix from time to time. While Manakas does some outstanding time in the spotlight, it’s really Wagnon’s everpresent vibraphone work, coupled with his thoughtful compositions that give the eight tracks here their character, as well as the many confluent interchanges between all the players involved. On “Eye of the Skies: Farewell,” the multiple layers of vibraphone work are nothing short of amazing. The complex shifts and changes within all the compositions are natural and always feel right, occasionally stretching out into some amazing grooves (as on the ten-minute “Osiris Pre-Science”), but jumping back in again just as seamlessly. Overall, this is an exemplary set that delivers the goods on many levels.