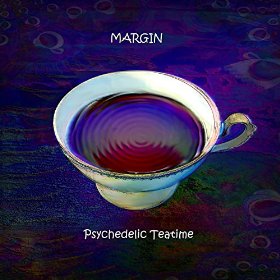 From the opening strains of this disc you could almost swear that Psychedelic Teatime is a newly discovered Pink Floyd artifact from the past. But this German trio Margin has produced a new pre-DSOTM Pink Floyd album without being Pink Floyd. Make no mistake, this is not a cover band, nor is Psychedelic Teatime a tribute album. The 24 minute opening track “A Mysterious Cup of Tea,” in five parts, is a mixture of instrumentals and vocals much in the style of Meddle. The intro immediately made me think of “Echoes” and the music is a perfect aural interpretation of the cover art. There are even some jazzy influences along the lines of “San Tropez.” In Part 2 there is the lyric phrase “a saucerful of secrets” that lends a new meaning to the words. Eerie Richard Wright style Hammond organ phrases appear from time to time, and the great guitar work is similar, but not the same as Dave Gilmour. After this long piece, the music abruptly changes to an upbeat, non-Floydian pop-psych song “Psychedelic Underground – The Short Trip.” A much longer, stronger, and progressive reworking of the song closes the disc. In between is the outstanding “Landscapes of the Sun” that begins with a vibraphone and acoustic guitar and builds to a beautiful and trippy psych jam paying homage to “A Saucerful of Secrets.” The other track is “Last Exit to Pluto” that starts slow and ethereal, much like something you would hear in a David Lynch movie. Over its 11 minutes it builds to an aggressive Floydian climax. This is an excellent release and I hope to hear much more from Margin in the future.

With the sprawling, five-part “A Mysterious Cup of Tea” that opens the disc, clocking in just shy of 24 minutes, it becomes pretty clear that Margin’s biggest influence is post-Barrett, pre-DSOTM Floyd, in a big way. This sidelong cut nicks the sound palette of the back side of Atom Heart Mother or Meddle without any shame, even recalling Roger Waters’ vocals to a degree, adding some additional stylistic variation in the guitar solos and bass riffage that might remind of same period Caravan. So who is Margin, anyway? From the album credits, it almost seems like the Berlin based project is pretty much the work of one Lutz Meinert, responsible for all the compositions, arrangements, and production, with a little help from Carola Meinert (backing vocals on two tracks) and Arne Spekat (acoustic guitar on two cuts); everything else on the album, plus the lead vocals is Lutz. Things shift gears a bit after that lengthy opener, and “Psychedelic Underground” (presented here twice, once in a succinct 3:36 version, and again as a nearly 11 minute version as the album closer) provides a bit of a lift into a more upbeat space-rock realm, and “Landscapes on the Sky” is probably the high point of the entire disc, launching with a muted vibraphone sound, following up with an interesting acoustic guitar rhythm and excellent vocal harmonies, all with a main melody that will surely find a place in the listener’s memory. The remaining track, “Last Exit to Pluto,” is a very lengthy and spacy instrumental that fits somewhere between all the rest of what’s here: a little More Floyd, a little bit early Tangerine Dream, with some rock outbursts to add color and power to the proceedings. All taken though, with Margin we are definitely caught in that late-sixties / early-seventies proto space rock place. Enjoy!

Pallas - Moment to Moment – Many bands who were part of the 80s neo-prog movement are facing the reality that even though their popularity is holding steady and it’s easier than ever to record albums and perform live,...  (2008) » Read more

Make a Rising - Infinite Ellipse and Head with Open Fontanel – This is one very strange band. And that’s strange in a good way – interesting, unusual, even unique in some respects – something completely new, not more of the same; and after all,...  (2008) » Read more

Banda Elástica - Maquizcoatl – This is not music in the traditional sense. But don't let this refrain you from sampling a collection of sonic atmospheres exclusively made with acoustic instruments and most noticeably, South...  (1997) » Read more