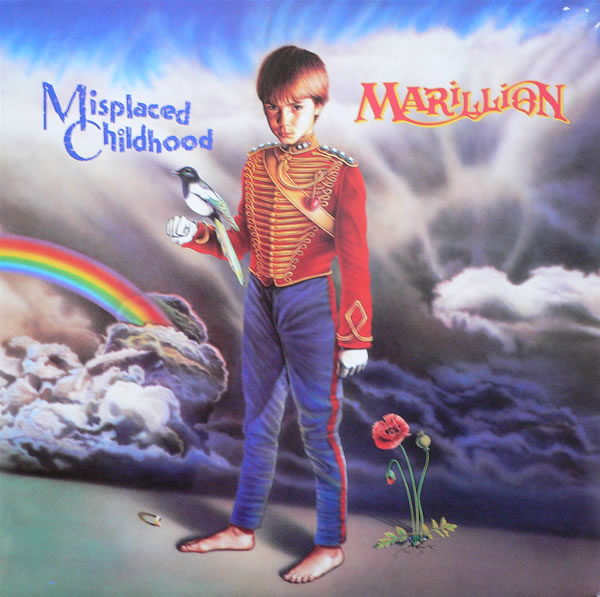 Marillion's opus Misplaced Childhood is about as perfect a specimen of the neo-progressive genre as you'll find. I am no adherent of this often-maligned and badly-defined brand of accessible symphonic rock, but back in the 80s before the advent of the CD medium, there were slim pickings, and this title, which spawned big hit Song "Kayleigh," did the job nicely. In retrospect, the album rings painfully nostalgic. After one relisten, I had the chorus to "Heart of Lothian" replaying in my head for two weeks, enough to prevent me from yet another repetition (well, at least it wasn't "Kayleigh"). Anyway, if you read Exposé, you know that describing this title would be akin to describing Nursery Cryme or Dark Side of the Moon. This reissue is a nicely remastered version of the album with a second disc including alternate versions, B sides, and an early demo version of the album. The latter, while quite interesting, is mostly redundant, and the B sides don't hold a candle to the gems produced around Script for a Jester's Tear, making the second disc dead weight to anyone but the ardent Marillion fan. Overall, this album is an ideal introduction to the Prog 101 student, but, regardless of its status as a neo-progressive classic, it's going to be old hat to most readers and dispensable to those with more experimental tastes, particularly due to the high lyric-to-instrumental ratio.

[Regarding the Deluxe Edition]

Misplaced Childhood, Marillion's third album and usually the one everybody considers their masterpiece, was a really important album for my teenage self. Much of the US was introduced to it via the single "Kayleigh" and honestly if that had been it, I probably wouldn't have thought of it as much more than the minor 80s hit it was. However, soon after my neighbor bought the album, a little later I borrowed it and then I must have played it a thousand times over the next year or so. So what do you say about an album where you know all the lyrics, where hearing it again gives you earworms for weeks? It's something of a paradox in that the lyrics and concept really come from someone coming into fame but still an outsider to it. And in writing something like this (and not to forget the concept's psychedelic origin) Fish really managed to create something with an almost archetypal power. It was birthed in progressive rock but by this point it was a far more pop friendly effort than Fugazi. It has all the same instrumental hallmarks of a U2 or even a Police or Rush album of the time period, but the influences were clearly still closer to Van der Graaf Generator or Genesis, it's just by this point Marillion had essentially absorbed these infuences and owned them. The album is a deep journey. It goes from regrets and lost love through singular experiences that form the fabric of the story. It continues to go into extremely dark, fragile territory as it continues into its second side and then manages to wrap all these lessons up into a profound message of hope. It's a story of an individual but one with all the broad strokes that would appeal to anyone who has gone through hell and sees the light at the end of the tunnel. As such this was the high watermark of what people call the "neo-progressive" movement (which, contrary to what you hear was not coined by American journalists) and has since been endlessly copied and reconstituted by numerous groups ever since.

The deluxe edition is supposedly the first of their albums which will be getting the deluxe treatment. The album, in fact, actually had a rather expanded 2 CD edition many years ago, all of which is included here. However this has a few singular bonus items of interest. Marillion was actually extraordinary live by the time this album rolled around, something I think was cemented by bringing veteran drummer Ian Mosley (Steve Hackett, Trace, Darryl Way's Wolf) on board. Included is a show from Utrecht in 1985 that sourced some of their extra-album material around the time. Unlike the more Fugazi-heavy Hammersmith Odeon show from late 1984 that shows up on Early Stages, this show draws a bit more from Script for a Jester's Tear and has a rendition of Misplaced Childhood much closer to the album itself. Fish rants on early about how much he has been drinking, something I'd normally worry about, but it doesn't prevent him at all from leading the band through a very inspired set. Second there's a 5.1 mix on here that I have not played because at this point I've heard this album so many times I have to space it out. But I have watched the extremely entertaining "making of" documentary where all the members of the band now, plus Fish and the producer, sit around the deck discussing it, even playing isolated tracks from it. It's really well done, except it would have probably helped me a lot if the subtitles were on when Fish spoke.

Marillion is a bit of an oddity for me in that after my initial love for them, I got really burned out by this style of music for about a decade before I rediscovered the band again with fresh ears. For all the criticism the genre received for being copyist (and a lot of it deserved, usually much later) I would honestly say at this point that Marillion was a lot more forward-thinking and clever than it is often given credit for these days. This is quite simply one of the best albums of the 80s and deserves all the accolades it gets. I'm not really sure the newly remastered versions improve anything too significantly at this point, so this set is probably more for collectors than newcomers (previous versions of this album are very inexpensive). But (except that I personally don't like these minibook sets where the holders can often be a bit too loose) it has been wonderfully put together with some incisive liner notes.

Bruce Palmer - The Cycle Is Complete – Bruce Palmer is part of one of rock's most famous stories. He and Neil Young, fresh out of the Mynah Birds, drove a hearse to Los Angeles looking for Stephen Stills to found Buffalo Springfield....  (2007) » Read more

Garmarna - Hildegard von Bingen – When I first heard that Garmarna’s next album was going to consist entirely of music by 12th Century composer Hildegard von Bingen, I was a bit concerned. But I was assured they weren’t going New...  (2002) » Read more

Magenta - Home, New York Suite & Night and Day – My goodness this band has been busy. Or I should say: Rob Reed has been busy, since he’s the creative engine that runs this group. He’s had time to do all this plus the Chimpan A side...  (2007) » Read more

SBB - Blue Trance – The legendary SBB is back once again with Blue Trance, same lineup as last time (multi-instrumentalist Józef Skrzek, guitarist Apostolis Anthimos, and drummer Gabor Nemeth), this must be like...  (2011) » Read more