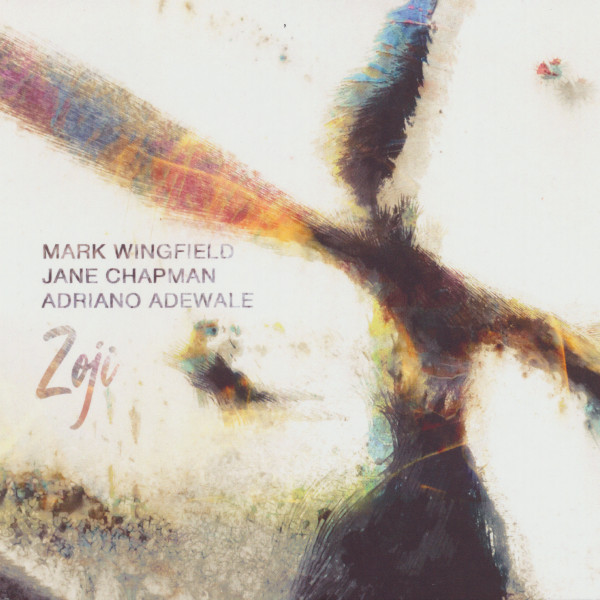 Guitarist Mark Wingfield has been showing up in a lot of different types of ensemble lately, from his duos and quartet groups with Markus Reuter to a duets with Gary Husband and Kevin Kastning to his own solo and sessions as leader. The album at hand sees him collaborating with harpsichordist Jane Chapman and percussionist Adriano Adewale for one of the most interesting sonic experiences you’re likely to come across. Wingfield’s guitar work is by now becoming a known quantity, with his unique tone and way of manipulating tone and pitch, and on Zoji there will be no surprises in that respect — not that his playing isn’t stellar and creative, just that it’s what we’ve come to expect from him. The real surprise here is Jane Chapman’s harpsichord. She’s taken an instrument associated not just with Classical music, but Classical music of the Baroque and Renaissance eras, and applies modern improvisational sensibilities to it. Once the piano came to prominence in the 1700s, the harpsichord began to fall out of favor due to the newer instrument’s dynamic range and expressive subtlety, nearly disappearing from new repertory by the late 19th Century. Players like Chapman have helped usher in a new era of relevance for the instrument, and Zoji is a fascinating example. The delicate, bright sounds are a brilliant complement to Wingfield’s legato and sustain, providing an appealing variety of textures which is amplified even further by Adewale’s percussion. Rather than keeping time, Adewale is mostly in free-flowing mode, punctuating phrases and providing atmosphere on a wide variety of hand drums as well as wooden, metallic, and other kinds of objects. On the occasions where he does keep time, his choices avoid traditional patterns, using his instruments in unconventional ways. Zoji is far and away one of the most original recordings I’ve heard in 2020, and an entertaining listen as well.