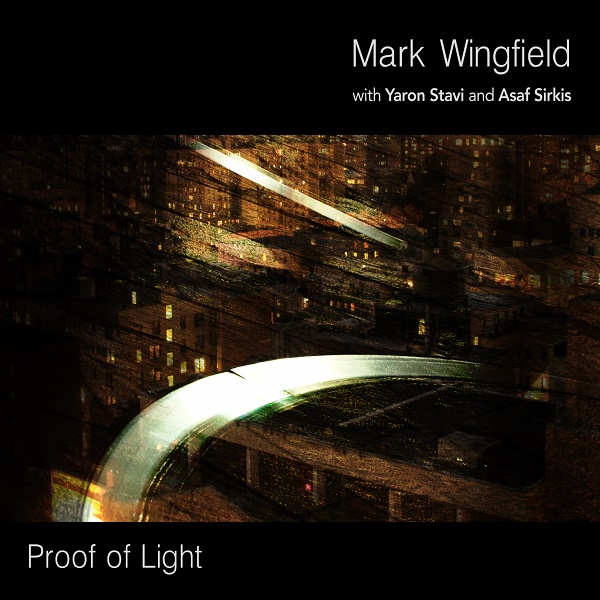 I first became aware of guitarist Mark Wingfield through I Walked into the Silver Darkness, a collaboration with acoustic guitar innovator Kevin Kastning, where Wingfield’s tasteful electric playing created a very nice contrast with Kastning’s resonant natural sounds. Proof of Light finds him in a more typical setting for an electric guitarist: at the lead of a jazz trio. Yaron Stavi (upright bass) and Asaf Sirkis (drums) complete the lineup, both of them veterans of the jazz world, with credits ranging from John Abercrombie and Larry Coryell to Phil Manzanera and Robert Wyatt. By going the route of using acoustic bass (though I'd swear I hear electric in a few spots), Wingfield positions his sound clearly on the jazz side of the fence, while his playing is inventive enough (both in the notes he chooses and the effects he uses to modify the sound) to appeal to rock guitar aficionados as well. I mentioned Terje Rypdal and Bill Frisell in my review of the Kastning duet, as well as Dennis Rea, and here I’ll add John Abercrombie — suffice it to say Wingfield is a consummate craftsman as well as a real artist, with superb dynamics and a supple touch. I really love his tone, so smooth at times, edgy at others, and he bends notes in a very original way. The is excellent stuff, another stunning guitar album in the Moonjune catalog. If you love guitar music but aren’t a jazz fan, give it a try; if you’re a jazz fan but not a traditionalist, Proof of Light should also be a big win.

New album from The Wrong Object