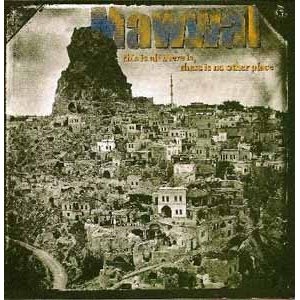 The first Mawwal release was one of the highlights of 2007, and here they’ve done it again for 2008, and not by simply remaking the first album. While many of the things that made Black Flies so great are still here (Jim Matus composing, playing guitar and singing, Percy Jones on bass, lots of great violin and percussion), the overall sound is more acoustic, replacing the electric guitar with a variety of stringed instruments from around the world. The surprising thing is that this does not lead to any loss of impact. These tunes kick world music butt just like the electric ones. Nusrat Fateh Ali Khan, whose voice graced the earlier album, is represented by two of his compositions. Matus and Co. are on a roll – this is one of those rare second albums that actually improves upon the debut. I just love to crank this and imagine a world where governments get along as well as musical styles do. Plus there’s something really infectious about tablas well played. I suppose you could raise all the old arguments about “cultural appropriation” that tend to come up when American and European musicians play in the styles of other cultures, and they are valid concerns, but this is art, and really only the quality of the result matters. Here, that quality is pretty high. But I would urge anyone who likes this and hasn’t heard some of the more “authentic” practitioners to check into them.

Symphorce - Godspeed – Both symphonic and forceful, Symphorce is a German power metal quintet with double guitar, bass, drums, and a singer. Their compositions follow a fairly typical verse-chorus structure, and stay...  (2006) » Read more

Teramaze delves into the subconscious, and what they find isn't nice