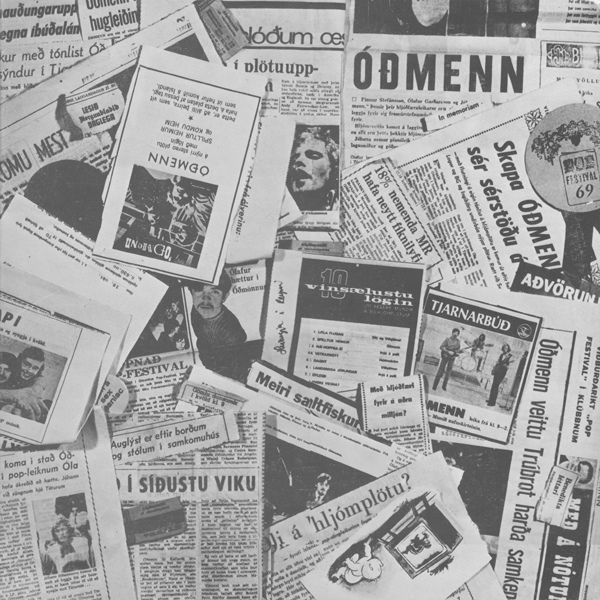 These days there are basically two ways of finding out about long-forgotten progressive artifacts (well, three if you count good old fashioned word of mouth): magazines / fanzines / newsletters such as this, and catalogs put out by independent mail-order dealers of typically high priced originals, who usually deal in psych / progressive / blues / folk / underground ad infinitum. While I won't get into a debate on the merits of dealing with these people, and the methods with which they hype an obscure piece into a "buried treasure" or "must have" (and which they coincidentally own the vast majority of the supply of said item), I will maintain that one particular descriptive term, when applied to an obscure item, should be cause for alarm and send you to run for cover like no other: "psych-prog." Nothing drives this point home better than the Óðmenn album. Óðmenn were a trio (guitar, bass, drums) from Iceland augmented by an organist and a pfnurodd-player (don't ask me – it's in Icelandic) that released this double LP in both Iceland and Denmark. It's been compared to early Pink Floyd and called "...in the running for best LP of the continent (Europe)", and I've seen originals sell for $900 - 1200. Why on earth I'll never know. It consists of 14 short songs which are similar to the early Steve Miller Band (on the good range) to really bad 60s pop music. Then they finish with a side-long 20 minute track (which I suppose some people think certifies them as being progressive) which consists primarily of a long guitar solo (which does have a few bright moments), a really sad drum solo, and shorter guitar solo. Most anyone's patience will be thoroughly tested. In three words – save your money!