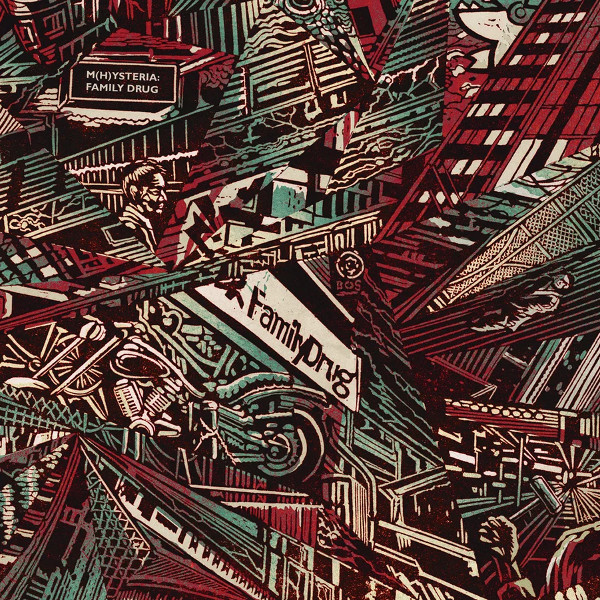 This group is an awkwardly named (how are you supposed to pronounce it?) three-piece that could be described as a very edgy keyboard trio. The man at the keys is Giovanni Di Domenico, who is involved in quite a few other projects, mostly with people prominent in the improvisational and avant-garde areas. On bass we have Laurens Smet, and the drummer is Jakob Warmenbol, both of whom are from Belgium. The music seems to have some composed (or maybe just arranged) parts, but improvisation is a big part of the process. Di Domenico uses organ most, but he’s nowhere near a conventional player, prone to chaotic runs and long chords where he plays with the tone. He also uses a lot of crazy synthesizer-like sounds, blipping, swooping, splatting, and injecting all sorts of unpredictable noises — no synths are credited, so he apparently gets these sounds by messing around with effects devices attached to the organ. With all the sound coming from the keyboards, sometimes it’s a little hard to make out what Smet is doing on the bass. At times he’s pounding out a really aggressive walking line, sort of post-pop on meth, and at other times he’s filling in the sound with a repetitive, hypnotic pedal tone overlaid with chords. Warmenbol’s playing bridges freedom and groove, adhering to neither jazz nor rock traditions. He sometimes rocks hard even without playing a set pattern, locking in with the bass line to propel the music while the keyboards go off on tangents. Family Drug consists of three tracks, coming a bit shy of 38 minutes, so it’s a little on the skimpy side for an album, though the brevity works in its favor, leaving the listener with hopes that the group will get together for another release. This is improvisational music that seems quite focussed in spite of the length of the individual tracks and never seems self-indulgent or tedious. If you’re looking for some keyboard work that breaks out of the mold, add this to your list that includes InterStatic and Mumpbeak.