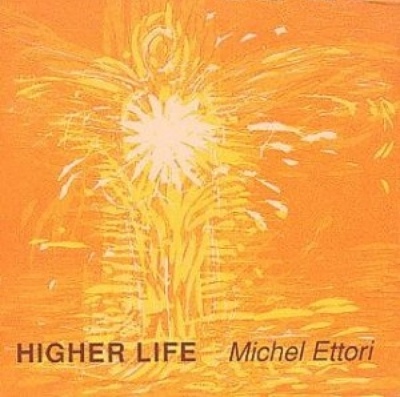 Some may remember Ettori's name from the lineup of the late 70s Magma spinoff Weidorje, he was the band's guitarist. He also appeared on follow-up albums by Jean-Philippe Goude and Patrick Gauthier, and also has some roots in Heldon, but from the early 80s onward little has been heard from him – a classic case of 'whatever happened to that guy, anyway?' In 1980, he became a follower of Sri Aurobindo, and left France to live in an experimental township near Pondichery (a French settlement in India), which is where most of the music for Higher Life was written. In late '86 he returned to France and recorded the music here with old friends Patrick Gauthier (keys) and Didier Batard (bass), but couldn't find a label willing to release it at that time. After this – due to other projects related to his work in India, Ettori gave up the guitar for over seven years, returning to the studio in '93 to record the two tracks that open and close this album. The music here is an instrumental acoustic based jazz-rock in the general style of folks like Al DiMeola, very technical and perfected, with an occasional Indian theme coming to the surface. Gauthier and Batard's roles are mostly supportive, though some nice keyboard solos make their way to the fore on several tunes. Those who are hoping for hints of his zeuhl days will be sadly disappointed, as there is nary a trace of that style on this album anywhere. Some of the tunes use sequenced electronic percussion, though most won't find their use objectionable, especially given the overwhelming dominance of Ettori's guitar. Some may enjoy this a lot – there is certainly much to recommend it, but there is a certain 'sameness' throughout that might give it limited shelf life over the long haul.

Mani Neumeier - Privat – Guru Guru drummer Mani is still going strong, to which two recent Japan visits will attest. Through the 80s and 90s he has kept busy with projects such as L.S. Bearforce, and Tiere de Nacht. This solo...  (1998) » Read more