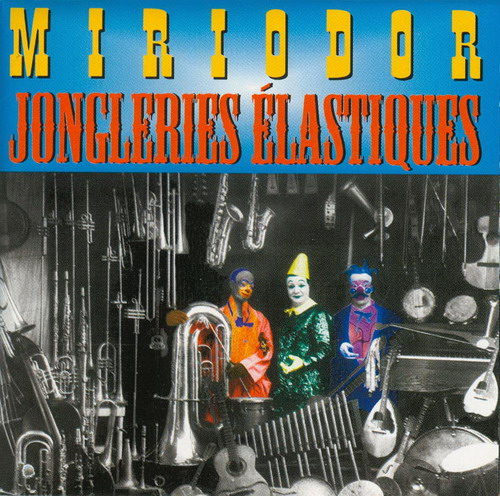 Anyone who's at all familiar with Miriodor will be immediately struck by the changes in this French-Canadian band. Where's all the synth, where's all the soprano sax melodies? The addition of Bernard Falaise (electric and acoustic guitars, basses, mandolin, synth) has had numerous positive effects on the original trio. The synth and sax are still there, but with so much burden removed they are used more sparingly and consequently much more effectively. Guitar chords, solos, and powerful effects fill up the sound nicely, as do the augmenting horn and string parts. The circus theme works surprisingly well, without limiting the emotional content as might be expected. Moods swing from upbeat and catchy ("Three Clowns") to somber and explosive ("The Little Ship's Terrible Wreck"). Miriodor have mastered the art of conveying images with their music, and each song fits its title like a glove. The quirky slide guitar and stretched-out bass on "The Caterpillar Tamer" couldn't be more appropriate. Above everything else, this is the most balanced, most intense, and most important album in this band's career. "Elastic Juggling" single-handedly demotes all prior efforts to "baby step" status, and will surely be one of the best releases come year's end. An addicting masterpiece, not to be missed. And when it's over, you'll find yourself cueing up "Igor, the Motorbike Bear" just one more time...

It has often been said that in music, the rests are just as important as the notes. Well, apparently this message never got through to Miriodor. Once they get rolling, they don't stop until the end. The pace varies from wicked fast to mellow and tame, but it is always driving along. Jongleries Elastiques is an hour packed full of several notes, no vocals (with lyrics anyway), complex polyrhythms, and odd harmonies galore. Their musical style covers the entire electromagnetic spectrum — from Mr. Rogers on steroids to Gentle Giant "everyone play a different song at the same time" to Tipographica-esque polymodal ostinatos without all the stops and starts. There's not a single track in a major key, and not many in natural minors either. The album is the Ferdinand Magellan of modal exploration — maybe that's why there's accordion and a progressive surf music track in the middle. How about whole tone scales? They play more whole steps before breakfast than most people do all day! Most of the progressive rock requirements are here — at least one non-standard instrument, weird time signatures, intense instrumental probing. Fans of R.I.O. and experimental progressive will have a field day with Miriodor.

For their fourth album (fifth if you count the cassette that came out between the first and second), Miriodor has again pulled out a long list of surprises. Their sound is rooted in the chamber rock one might associate with bands like Univers Zero and Henry Cow (circa Western Culture), with touches of folk and other elements. In fact this is a hard band to pin down because each of their releases have been so different, and this latest is no exception. There are wild mood swings and time changes, odd angularities and dissonant incongruities that together make for some great listening. With the exception of "34+9(43)," which contains some unusual vocalizing, the album is entirely instrumental. The big news is the addition of guitar courtesy new member Bernard Falaise, which would have made Miriodor a four piece were it not for the more recent departure of reeds player Sabin Hudon, who stuck around just long enough to finish most of the album. The guitar certainly isn't understated — it rocks, and its presence gives the band's sound a whole new character, and in the process has moved the saxes and synths into a more natural and complimentary role. Definitely music that can be explored on many levels, each successive listen revealing something new and more interesting. Fans of seventies Crimson, UK, Zappa, Gentle Giant, and Van Der Graaf should find plenty of interest here.

Chris Béya Atoll - Illian, J’entends gronder la Terre – There are several reasons to expect the worst from this release. Many “reunions” and “reformations” of bands from the 70s have not turned out well; a look at the credits shows...  (2005) » Read more

Gerard - Save Knight by the Night – Keyboardist Toshio Egawa is one of the prime movers in Japan's progressive rock scene since the late 70s – originally with the band Novela, then splitting in the early 70s to form his own...  (1996) » Read more

Solaris - Live in Los Angeles – For anyone that was completely blown away by this band's performance at Progfest in November '95 (everyone in the house, from what this writer could ascertain), this two disc set is nothing...  (1997) » Read more

Fifty Foot Hose - Sing Like Scaffold – Fifty Foot Hose occupy that most rare of places, avant garde psychedelia, a mix very few bands have even attempted, let alone pulled off. The fact that they first honed their craft with their debut...  (2000) » Read more