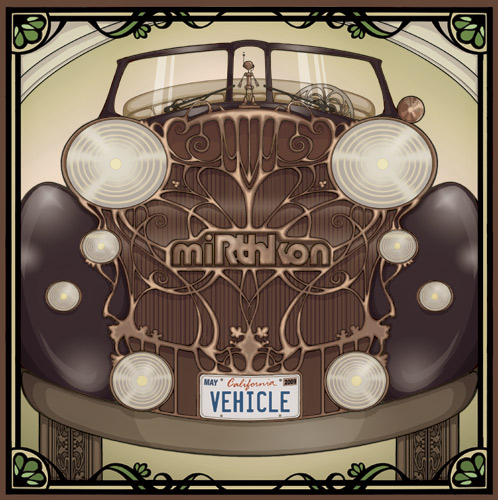 Stylistically, miRthkon covers a lot of ground. Led by guitarist/composer Wally Scharold, the band features twin guitar, bass, drums, sax, and clarinet on most songs. The album is a primarily instrumental collection but contains a few vocal tracks, including the Zappa sounding "Coven of Coyotes." "Banana" contains both sugary pop and growling metal vocals, sometimes simultaneously. Several songs have a heavy rock or metal feel in parts. Interestingly, these heavier sections are often driven by the clarinet or sax, which are equally featured with guitar as the primary melodic instruments throughout the album. "Flashbulb of Orgasm" and "Automation" sound reminiscent of Sleepytime Gorilla Museum due to the intricate song structure and use of several synchronized rhythmic start and stop patterns with a melody played over the top. Some SGM similarity is not surprising given that Vehicle was mixed and engineered by SGM's bassist Dan Rathbun. Overall, Vehicle has a mostly fast and frenetic pace, but some song sections are slower. Frequently, twin electric guitars provide the chordal structure and lay the framework for the songs while the melody is concurrently provided by sax and clarinet. "Bappsciliophuaega" and "Camelopardalis" are good examples of this. "Johnny Yen" is influenced by classic odd time signature prog rock. "Honey Key Jamboree" mixes disco, funk, and jazz and contains a ripping three-minute-long guitar solo. The music is a dense blend of big band, metal, humor, pop, emotion, and irreverence. How can you go wrong with that?