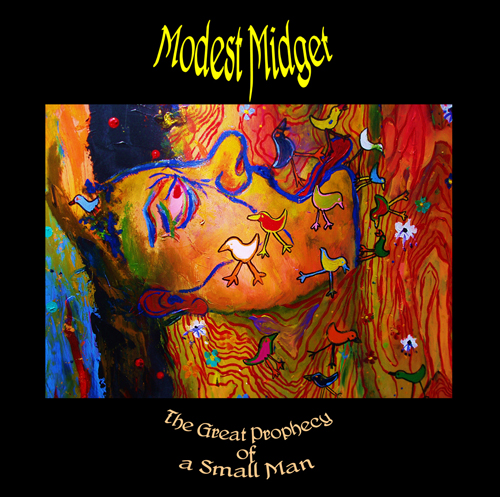 Lionel Ziblat is an Israeli / Argentinean composer and musician based in Holland, and is the visionary and driving force behind Modest Midget, a four-piece touring band, although many more musicians and friends had a hand in creating this, the band’s first full length CD. The thirteen hook-filled cuts (which include four instrumentals) present art-rock in its most powerful form, seemingly drawing some inspiration from rock and pop influences like The Beach Boys, Beatles, Godley & Creme, Split Enz, Mike Keneally, Adrian Belew, and perhaps others. But that’s only half the story. Seamlessly blended in with this are the strong and unmistakable influences of jazz, a worldwide variety of folk styles, klezmer, modern classical, classic progressive rock, soundtrack themes and even touches of punk. The result is nothing short of brilliant, beginning to end. Ziblat is the main vocalist, and handles guitars, keys, bass, and a variety of percussion instruments. Also in the mix are some beautiful harmony vocals, kit drums, viola, violin, clarinet, a full family of saxophones, and much more including additional bass, keys and guitars. The orchestral sections might even remind a listener of the clever arrangement style of Frank Zappa on his classic albums like Waka/Jawaka. Seriously, there isn’t a dull spot on this disc anywhere, and surprises abound at every turn. This will definitely find a place high on my top discs of the year.