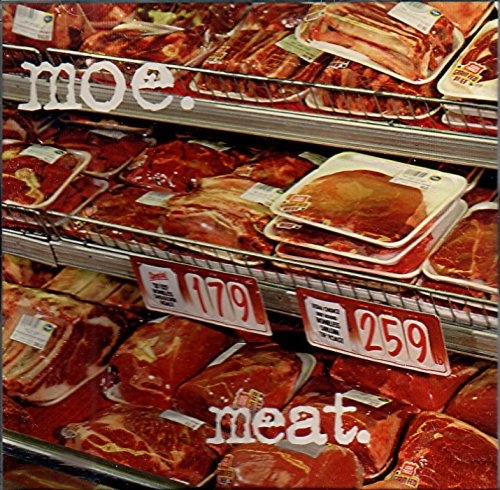 moe. (the lower-case "m" and the period are not typos) has been gigging around the east coast for the past five years, cultivating a loyal following with their dynamic live performances and a handful of self-released recordings. A year ago they started catching the eyes and ears of Sony, who saw fit to not only sign them but also to release Meat, a limited edition single to promote their upcoming debut No Doy. The concept of a promo single may be less than noteworthy, but in the four minute long, radio-friendly world of major-label singles, this 45 minute instrumental is a bit of an anomaly, to put it mildly. A concert favorite of the band and fans alike, "Meat" won't appear on the album proper; it comes as a gift to fans of the band's more complex, improvisational live persona, who may be left somewhat unfulfilled by parts of No Doy.

So what does it sound like? moe. is a quartet (dual guitars, bass, drums) who blend a unique recipe of seemingly incongruous influences, ranging from the spacy jamming of early Pink Floyd and German bands like Guru Guru and Amon Düül, to the quirky pop stylings of Camper Van Beethoven; from the complexity and humor of Frank Zappa to the aggressive bass-heavy riffing of Primus. They have their share of memorable pop-ish tunes, but "Meat" is one of moe.'s improvisational showcases, featuring a mysterious and somewhat sinister opening theme which typically launches into a massive frenetic jam. The band routinely stretches their more exploratory tunes out into the 15 to 20 minute range without succumbing to inspirational stagnation; "Meat" is exceptional in part because they manage to maintain a nearly constant flow of organic musical ideas for a full 3/4 of an hour. Phish (who still do it the best) are the only other rock band around who have explored, much less attained, this level of group improvisation / spontaneous composition. The jam on this version of "Meat" is even more sumptuous than usual, coursing through widely varied musical landscapes with impressive dexterity. An outstanding document of moe.'s improvisational ability, "Meat" should more than satisfy long-time fans, as well as serve as an ample, albeit slightly one-sided introduction for newcomers to a fantastic live band.

Canned Heat / John Lee Hooker - Hooker 'n' Heat, Historical Figures, Ancient Heads, & The New Age – If you don't dig the blues and you don't boogie, skip this review. Canned Heat's stock in trade was merging classic blues with rock, and in the late 60s nobody did it better, due in part...  (2007) » Read more