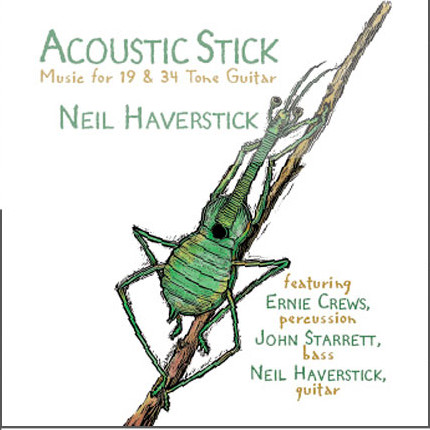 This is a fine release that will appeal equally to fans of pure guitar technique and to fans of good old acoustic jazz and blues guitar. It is definitely tempting to write on and on about how the sounds on this album were made; indeed, that seems to be the focus of most of the reviews I have seen of this man’s work. The use of microtones, effectively changing the whole structure of Western music, is certainly a bold idea. Haverstick uses two different custom-made guitars on this album — one has 19 tones per scale and the other has 34. The standard Western scale has only 12 tones. Sure, that’s a swell idea, but what does it do for the music? The effect on the music and composition is astounding, in fact. Our Western ears are generally used to hearing 12 tone scales, even if we are not aware of the fact. Adding new microtones to existing octave intervals (that is, 19 intervals between low E and high E instead of 12) allows entire chords (either played or merely implied) to be “bent” within the context of an established tonality. That is, certain chords and figures sound very alien, as if the strings were flat or sharp. These alien moments are quickly resolved, adding a constant tension and release to the music. To my ears, this whole experience is quite unique and very soulful. Indeed, jazz and blues both evolved partially from non-Western musics, and have frequently used “bent” tones to add tension (especially the blues). Unlike a saxophone’s note bending, however, Haverstick’s bends are just a normal function of his altered instrument, simultaneously giving them a natural and an otherworldly feel. To add icing on the cake, all of the pieces are quite accessible, using the expanded vocabulary of Haverstick’s instrument and technique to compose some very groovy music. Highly recommended.

Anaïd - Four Years – The hybrid French/English ensemble Anaïd may or may not still be in existence; this CD combines some tracks from their only LP Belladonna and selected material from before and after. The title...  (1995) » Read more