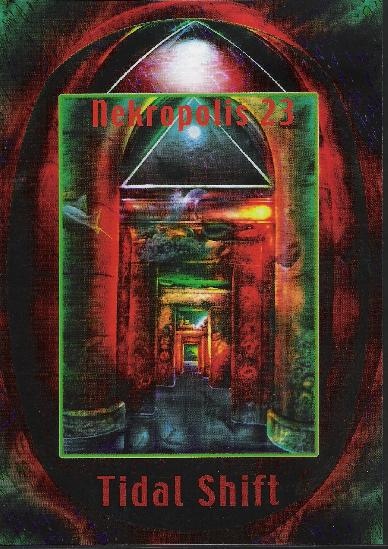 Recorded in April 2004 at a studio space in Munich, these ten psychedelic jam tracks show the band at the peak of their intensity, working in a true improvisational spirit. Led by bassist Peter Frohmader (five-string fretted and four-string fretless), many of these tracks have him very much in the forefront, high up in the mix, brutally assaulting the bottom end, not unlike Paganotti or Top when they played with Magma in the mid-70s. Joining him on all the tracks are drummer Holger Röder, who keeps the rhythmic angles brisk, interesting and tight, and Udo Gerhards (ex-Trigon) on keyboards (wearing an Änglagård shirt), who tends to handle most of the high end solos in the absence of other players. At times the pace eases, as on “Nameless City,” and the band moves into more of a drifty spacious mode, tossing the driving rhythms and going a bit more freeform. Joining the band on many of the cuts is regular Nekropolis violinist Matthias Friedrich and Amon Düül II guitarist Chris Karrer (although on opener “Yellow King” and the closing track it’s Karrer playing the violin). The Larks’ Tongues image on Holger’s drum head doesn’t go unnoticed either; one of the latter tracks featuring all five evolves very much like “The Talking Drum.” This is a two-camera shoot, one covering the stage and the other handling close-ups. One minor caution, the picture format is PAL only and may not play on your average NTSC player. A brilliant performance.

The Oliver Wakeman Band - Coming to Town: Live in Katowice – Yes fans are probably aware that Rick Wakeman’s son Oliver has been playing keyboards on their recent tour, and for those curious to see what his own band looks and sounds like here’s your chance....  (2009) » Read more