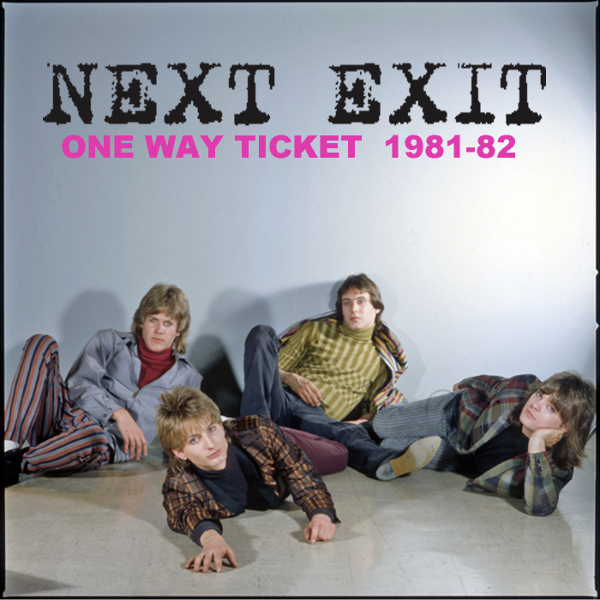 For some time now, I’ve been writing about the saga of Spokane’s Sweet Madness, a New Wave-ish art rock band active from 1979-81. Two compilations of their recordings have been released, and now One Way Ticket continues the story into its next phase. By 1981, the band had decided to ditch Spokane and head for Seattle, in the process modifying their sound by dropping keyboards and adding a new lead guitar player. The British ska band Madness was coming on the scene, so a name change was in order to keep people from thinking they were related. Thus was born Next Exit. They rearranged some of their existing tunes for the new lineup and started writing new tunes, and the demos they made in 1981-82 are collected here. Five of the songs would later end up on Next Exit’s album Metropolitan West; ten are new versions of songs previously released on the Sweet Madness collections; and four have not to date appeared anywhere else. (Yes, there is some overlap in those categories, as there are only 16 tracks on this collection.) To get the first concern out of the way, while these are technically demos, the sound quality is excellent, a clear step up from what Sweet Madness managed, and could easily have worked on a public release at the time. Many of the basics are intact from the previous incarnation, with Jan Gregor’s vocals at the center and the energetic rhythm section of Mark Fenton (drums) and Don Lynd (bass) blasting through the arrangements. The new addition was guitarist Greg Morlan, who brings a flashier technique to the proceedings, even occasional hints of metal and surf rock as well as creative use of varying tones and effects. Morlan’s work in both backing and soloing roles is distinctive, giving the band a sound that doesn’t really resemble any other group of the time. The songs range from the warped rockabilly of “98 Decibel Man” to the New Wave of “I’m Not Vicious” to the moody pseudo-ballad “Concrete River.” Three live tracks are included, and while the recording quality is noticeably inferior, it’s still quite listenable, and the energy level of the band is amazing. Between Fenton’s insane drumming and Morlan’s variegated guitar, these guys must have been a real kick on stage. One Way Ticket is a fascinating chapter in a near-forgotten musical journey, and I can’t help thinking that barring geography and bad luck, this band could have earned notice on an international level.