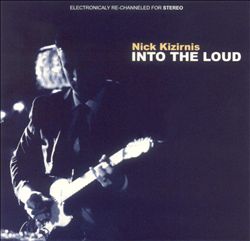 If you ever wondered what's up in Dayton, Ohio, Nick Kizirnis may be able to offer some clues with his first solo release Into the Loud. A veteran of numerous other Dayton area bands (Cage, Eyesinweasel, Mulchmen, Nicky Kay and His Fabulous Kay Tones), this is more than anything a very fun and rockin' disc of fifteen songs that range from post-punk new wave rock to singer-songwriter to modern alternative, informed by surf rock, rockabilly, and even British invasion. The aggressive and catchy, hook laden nature of many of these tunes, as well as the vocal delivery often recalls late 70s Pure Pop for Now People-era Nick Lowe; these are the kind of songs that quickly get inside your head and keep playing there for days. A talented guitarist as well, Kizirnis often laces his material with electronics (squeaky-boxes, Theremins, harmonizers and such) giving it all a bit of a carefree experimental edge. He does much of his own bass work, but works with two supporting bassists and two drummers on most, and a backing female vocalist on a handful of tracks. This may be too straight-ahead for the prog-rock purists, but for those not afraid to cut loose and rawk a bit, this disc hits the spot.

DJ Spooky That Subliminal Kid - Celestial Mechanix: The Blue Series Mastermix – It’s not hard to figure out why DJ Spooky is in such demand in the New York downtown scene; it seems the man has no tangible musical boundaries by finding further riches in already excellent sound...  (2005) » Read more