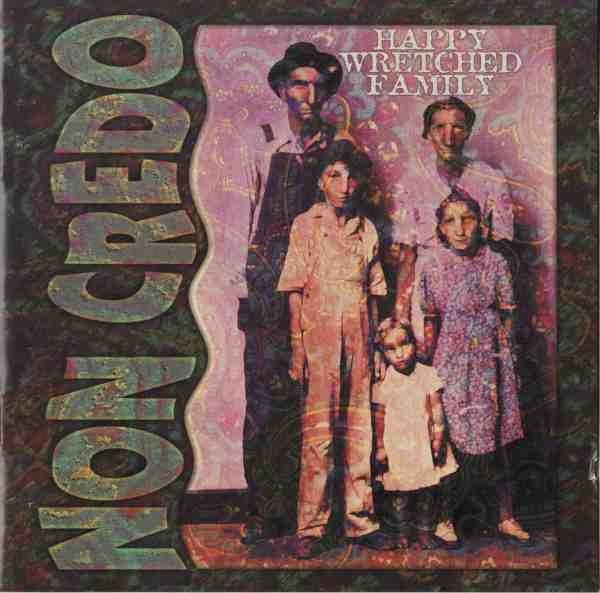 Though this is only Non Credo's second outing, one listen should erase any question about why it's been so long since their debut, Reluctant Hosts. The Los Angeles duo consists of just Kira Vollman and Joe Berardi. The latter was a member of The Fibonaccis, a group that never really reached their potential during their short lifespan in the 80s. I'm glad to say, however, that Non Credo does reach theirs, and then some. What this band offers up here is a unique and refreshing take on the avant-slanted "art song" format pioneered by groups like The Art Bears. But to me, Happy Wretched Family outclasses just about all of its ancestors in the RIO world, for the simple reason that Non Credo does not deny the importance of technical craft in making music. And this is what separates it from so much other music in this mold. So often I find that these albums will boast one or two promising efforts, which quickly self-destruct in a riot of unfocused rambling. The legacy of Henry Cow seems to hold a hegemony over so much RIO output, and it often adversely affects the results. But Non Credo concentrate on a civilized experimentation that never gets away from them. Always in control and fully cognizant of the boundaries, they exploit the virtues of electronic sound programming beautifully, adding bass, clarinet, voice, drums, and tuned percussion to the quirky blend. The compositions are pithy, concise, and to-the-point. There are a few moments, notably on "Hacked," that almost distill elements of early Art Zoyd into a compact package. Kira is breathtaking as a vocalist. A range that of which you'd expect of an opera singer is put to good use; with a different characterization on each song, mostly of a dark Teutonic expressionism. But being American, there is a whimsical attitude to balance it out. I love the resulting irony when her impassioned singing is juxtaposed to the sometimes bleak and stoic instrumental backing. It's these kinds of contrasts that really make this work something out of the ordinary. And Berardi has politely tossed the traditional drummer's role out the window; in its place is a unique inflection on each and every song. He is the epitome of subtlety, grace and finesse, highlighting the music by exploiting all the myriad colors and textures of the kit. Nary a "boom-tap-boom-tap" rears its ugly head! Music of the caliber that once helped define genres and set standards, but eludes easy classification, Happy Wretched Family warrants high praise indeed.

Body Full of Stars - Falling Angels – Mark Dunn seems like quite a colorful guy. The leader and main songwriter for English group Body Full of Stars writes spirited Afro- and British pop and has a vocal delivery full of English wit and...  (1999) » Read more