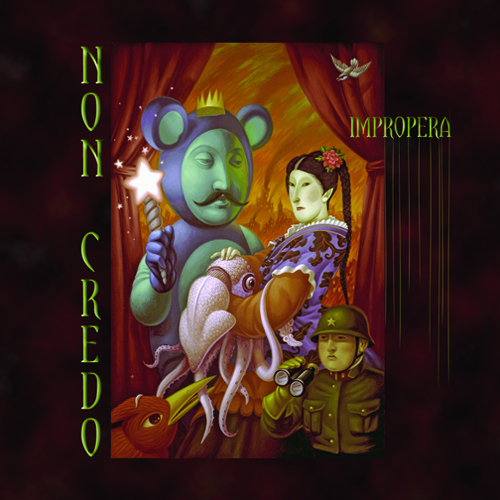 It won’t take more than about twenty seconds of the first track for the listener to know they are in for an unusual treat, one which the remainder of this 60-plus minute epic bears out. Touched by a number of styles, but captive of none, the entire project is infused with adventurous energy, an improvisational spirit, and seemingly exotic instrumentation – or perhaps it’s just conventional instrumentation used in exotic ways. The southern California based duo of Joe Berardi and Kira Vollman have created an unusual juxtaposition of audio vignettes that step carefully between simmering percussive improvisations, quasi-operatic strangeness (Vollman’s vocal range is comparable to your average synthesizer at times), trippy avant-garde lyrical interludes, jazz-infected chamber moments, and an overall rock-in-opposition spirit. Berardi is primarily a percussionist, but here his main instruments are a sampling keyboard and samplers; when combined with Vollman’s contributions on voice, percussion, bass clarinet, and other instruments, Impropera becomes entirely performable in a live setting, which in fact the duo has been doing now for a number of years. The energy level cycles regularly throughout the three major sections (indexed into nineteen tracks), which tends to hold a listener’s attention well. All taken, this is patently unique, beautiful, and haunting at times; the only remote comparisons might be the work of San Francisco’s Discord Aggregate or Big City Orchestra. An unusual treat indeed!