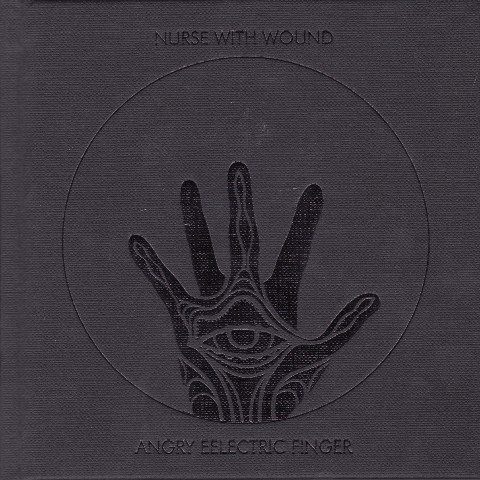 In their continuing quest to fill the shelves of obsessive collectors of obscure music with limited edition products, Beta-lactam Ring has now produced a NWW box that takes up more space than six average BLR releases. As the story goes, NWW mainman Steve Stapleton (using his Babs Santini pseudonym) painted 100 little round discs to commemorate the release of the three Angry Electric Finger CDs (reviewed previously). The paintings are presented in a nicely bound hardback book along with the NWW recording called Zero Mix. The book is also available separately, or as part of a deluxe box set with an additional CD called Requital for Lady Day. Zero Mix is in fact the “source material” created by Steve Stapleton and Colin Potter for the Angry Electric Finger project. They took some Xhol Caravan recordings and “sampled and edited” them, then handed the results to three different artists to remix – which explains the title of this CD. “Part One” is more than 17 minutes of creepy drones punctuated by weird ratchet noises – hard to say what Xhol Caravan went into this. If you’re looking for something that sounds recognizably like music, you’ll want to turn elsewhere, and a technical description of how the sounds were created might be more interesting than the sounds themselves. But if you’re of the right frame of mind, and in the right mood, there is something about these odd noises that works. “Part Two” is a bit more freaky and in your face, and even has some sounds that can be identified as produced by instruments. “Part Three” is back to the more ambient textures, though with some musical content added. Requital’s two long pieces, totaling a bit over 40 minutes, features some oddly compelling washes of noise, that while they lack any “musical” elements, make a kind of weird sense, sort of an electronic take on the mood of Ligeti’s eerie “slab music” from 2001: A Space Odyssey. In other words, not really significantly different from Zero Mix, and a fitting companion for the set.