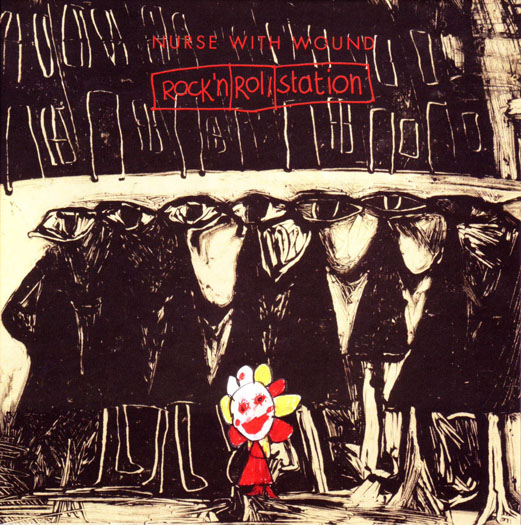 Somewhere within the seven pieces that comprise Rock ‘n’ Roll Station a sadly conformist aesthetic emerges, apparently in conformity with its own tradition of non-conformity. The main point of objectively trying to differentiate this incarnation of NWW from most other musics of our day is simply a matter of sound, not music. Less hair splitting than you might first think because the pieces are built around fairly basic – though profoundly itchy – grooves which remain mostly subservient to “the tyranny of four.” Industrial, rhythm box or GURU-spliced beats act as the anchor for subsequently organizing processed sounds, spoken words and noise on top of, next to, or between the pulses: point being that, if not for the atypical sounds of such frosting, Rock ‘n’ Roll Station might just as easily be an actual rock ‘n’ roll record. Then again, it’s not a rock ‘n’ roll record any more than discs by Throbbing Gristle or the Legendary Pink Dots might be. The curiously looping storyline of the title track, the white noise and whispered inflections of “The Self Sufficient Sexual Shoe” or the near-droned sonic clots of “Finsbury Park” all display an unapologetically solipsistic interest in near trance-like minimalism, trading away any too fine a point on finished results while remaining obsessed with the recorded present. Consequently, these pieces are more about posture than the posit of any radical take on the self-described proto-hip-hop sound art forms.