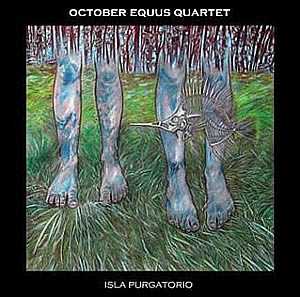 So if you are familiar with their earlier releases, you may be asking what’s the difference between October Equus and October Equus Quartet? The answer is really no difference. With the exception of their 2011 album Saturnal where they expanded to a seven-piece with cello and extra woodwinds, they have always been a quartet of guitarist and composer Ángel Ontalva, bassist Amanda Pazos, various drummers along the way (Vasco Trilla has been their drummer since 2010) and up until the last years’ Permafrost album, keyboardist Victor Rodriguez, who has since left to be replaced by sax player Alfonso Muñoz, who was part of that expanded lineup a few years ago. Trilla and Muñoz are also members of Planeta Imagiario. So the “Quartet” just formalizes their configuration. Of course replacing keyboards with saxes changes the band’s sound somewhat, adding a bit more punch and aggression to the proceedings at times, and a bit more of a chamber feel at others, but throughout the band remains a fertile laboratory of innovation. Outside of some grotesque vocals (if one could call them that) at the beginning of the opening track “Neutoma,” (in line with the Isla Purgatorio theme), they remain pretty much an instrumental unit mining the boundaries of rock, jazz and chamber and putting it all together into a sound of their own. Influences may include, but are not limited to King Crimson, Frank Zappa, elements of Univers Zero, and Miriodor. The compositions are sufficiently complex to court the interest of the discerning avant-progressive listener, yet remain accessible enough to not be alienating, with some open zones for improvisation. This is one that just gets better and better the more one listens to it and builds familiarity, and after a dozen or so listens on might conclude (as I have) that this is October Equus’ best effort to date.