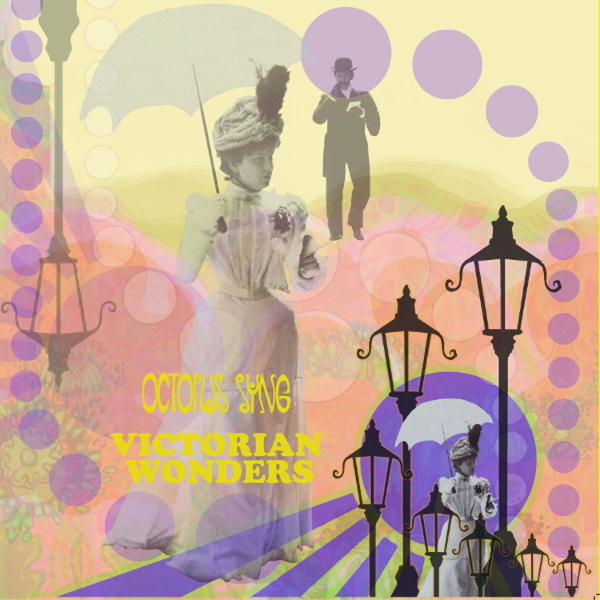 Two years since their last full length release Hollow Ghost / Rochelle Salt, Octopus Syng have graced us with their latest take on dreamy psych pop, Victorian Wonders. These eleven whimsical songs take you on many short journeys, and just when you start feeling comfortable, there are subtle shifts into the surreal. The first two songs, “One Day at the Amusement Park” and “If You Were a Flower,” lull you into blissful relaxation. Then “19th Century Romanticism” shifts 90 degrees through an unseen door with its narration and abstractness. “Otto Rank Is a Traitor” and perhaps he is, but the Victorian mood along with Jaire’s and Joni’s vocals provide a definite eerie vibe. When I read the title “Go Away Damn Raindrops” I expected a curmudgeonly song, but instead this a lush arrangement that for some unidentifiable reason made me think of King Crimson’s “I Talk to the Wind.” The next two songs, “Let it Rain / Let it Shine” and “Sunday’s Jackdaws” are, in my opinion, the best on the album. “Let it Rain / Let it Shine” is an excellent melodic and catchy acid folk song and “Sunday’s Jackdaws” is a delicate, almost Asian, floating song that morphs into aggressive rock with cascading guitar runs, reminding me of the Soft Hearted Scientists. The next song, “Roundabout,” is not a Yes cover. Instead the band presents another of their signature dreamy pop-psych ballads. “Spider Webs” is a fragile slow paced song, much like a spider moving along the strands of its web. “Early Song” is like slowly awakening with ambient sounds and music on the edge of consciousness. And the album closes with “These Precious Summer Nights,” a diaphanous musical journey that slowly builds to a climax of psych guitar riffs, to fade away into the aether of a warm summer night. Another excellent album from Octopus Syng.