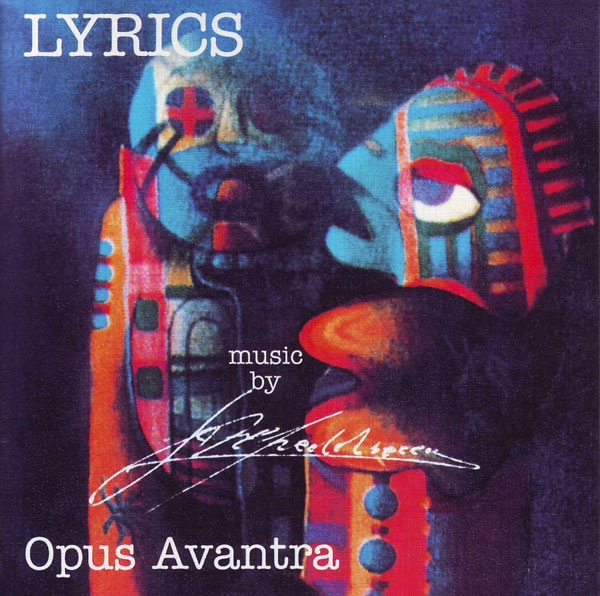 Opus Avantra (see overview in issue #7) were quite a unique combo. Led by Alfredo Tisocco and vocalist Donella del Monaco, Opus Avantra have been around since the mid 70s when they released two highly acclaimed albums of avant/classical/rock. Lyrics is Opus Avantra's fourth album , five or six years since their last effort, Strata. It's interesting that in the span of time the ensemble has been around, they've barely wavered in focus and for all intent and purposes are still involved in making the same type of music they did over 20 years ago. Much of this is typically analogous to some 20th Century classical music, a genre I won't pretend to know enough about to quote influences. Later in the album after two long suites, the more “avant” tendencies show through – there’s even a track with a weird percussive beat and strange voices. In general, this is quite comparable to Strata or their 70s albums and Opus Avantra fans will find much to like here.

Only their fourth release in 22 years, yet it is surprising to see how this band has stuck to their guns, combining classical, folk, and avant-garde elements, and not given into the temptation to conform and commercialize. That doesn't mean they haven't mellowed with age. In fact for anyone who might have been put off by vocalist Donella del Monaco on the early albums Introspezzione and Lord Cromwell, this may be a good point to give them another try. Many of the old names are still here: bandleader and keyboardist Alfredo Tisocco, and violinists Piergidio Spiller and Enrico Professione have been members from day one, while cellist Alberto Brendolin, oboist Angelo Lora and percussionist Saverio Tasca survive from the last recorded incarnation in the late 80s. As usual, one can expect absolutely anything: "Ballata" is a folk tune with the unique avant-twist, while "Lirica Metafisica" is a more subtle neo-classical abstraction for string section. The three-part opener "Viaggio Immaginario" has somewhat of a 'bolero' feel with Del Monaco's voice and Lora's oboe floating over the rhythmic structures set up between the string section and percussion. And of course there had to be at least one noisy and bizzare vocal piece – "Danza Arcana" is a sure bet to clear your next party, but perhaps the album's most interesting piece is the four-part "Misterious Japanese Suite," driven by Tisocco's Synclavier experimentation. In all, this is another fine offering from this sadly overlooked ensemble.

The latest from Opus Avantra finds pianist Alfredo Tisocco conducting his ensemble of strings and woodwinds through a variety of modern and avant-garde tinged compositions. Influences range from 20th Century composers such as Stravinsky, Schönberg, Bartók, and Hovanhess, to Mediterranean folk music, to a hint of new age sensibility on the final track. As one might expect, therefore, there is a fair amount of variety in the different pieces on this disc, from the slow crescendo of the rhythmic string pedal on the opening "Viaggio Immaginario" to the alternately delicate and chaotic textures of "Misterious Japanese Suite" to the folky vocal melodies of "Balleta" to the electronic percussion and dissonant sounds of "Danza Arcana." The classically-styled pieces, which comprise about two-thirds of this 43-minute disc, are fairly strong and cohesive; Tisocco is obviously a skilled and accomplished composer. One only wonders why he chose to play a Yamaha Disklavier instead of a real grand piano? The difference is noticeable... Recommended only to those with a penchant for modern classical music; if you are just getting into this genre, there are better places to start.

Admiral Ted Brinkley (semi-ret.) - Directs the Verrugoso Vista Junior Junior College Grads of ‘77 – Here’s something that came right in out of left field; the artist, title, liner notes and everything else about this disc appear to be some kind of prank – except for the music, that is....  (2006) » Read more

Metamorfosi - ...E Fu il Sesto Giorno & Inferno – Metamorfosi were more or less a keyboard oriented trio with the addition of a lead vocalist. Their debut album was a very 60s psych/beat album with progressive touches – an overblown concept...  (1995) » Read more

Kings of Convenience - Quiet Is the New Loud, Versus & Riot on an Empty Street – This is one of those belated discoveries, where a copy of this Norwegian duo’s latest came into my possession, and then I attempted to work my way backward to their self-titled (and completely...  (2007) » Read more

The Flower Kings - Retropolis – For starters, Retropolis is a commercial progressive album. It's definitively got wide-audience appeal. We find here a balanced mix of vocal (with a tone reminiscent of John Wetton's) and...  (1997) » Read more