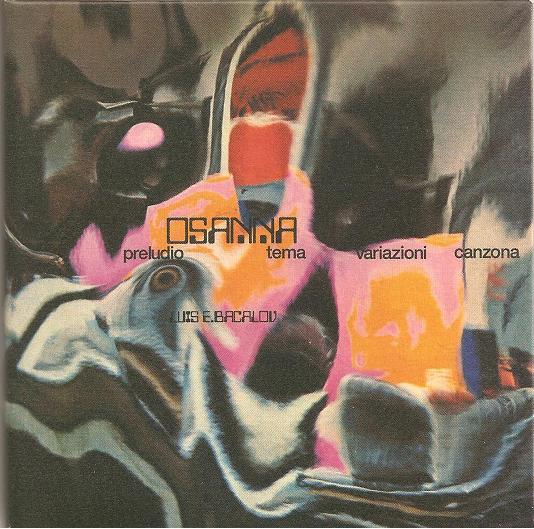 This album represents the intersection of a number of trends going on in Italy at the time it was made. One was for rock bands to adopt Classical forms, sometimes even involving actual orchestras (New Trolls, Rovescio della Medaglia). Another was movies about gangsters. Another was for movies to have soundtracks by rock bands (Goblin and so on). So here you have a rock band doing music in a Classical form (prelude, theme, variations) with an orchestra as the soundtrack to a gangster movie. In this case, the “Preludio” and “Tema” were written by Luis Enriquez Bacalov, who also worked with New Trolls and RdM on their Classical blending albums. The “Variazioni” are credited to Osanna, and generally contain more rock elements, including some great fuzzed-out guitar solos, a couple of bits of wigged out synthesizer, and some energetic flute and sax. The seven variations are mostly short (in fact the whole album clocks in at only thirty minutes) and run together, so unless you’re paying attention to the display on your player, it sounds like a smaller number of longer pieces. “Variazione II (My Mind Flies)” is the only one with lyrics, a lovely little bit with acoustic guitar; the whole thing finishes off with “Canzona (There Will Be Time),” a massively overblown rock ballad that borders on kitsch. This new reissue comes in a gatefold mini-LP reproduction package, which is lovely if inconvenient, with a booklet containing liner notes, photos, and lyrics.