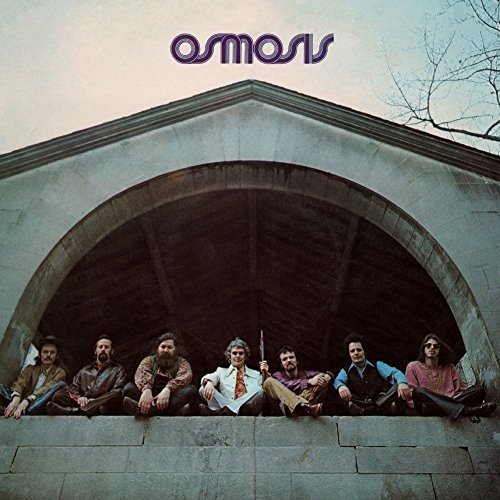 It’s a lot easier to make a progressive rock record in 2018 than it was in 1970. All one needs to do is find one or more established progressive artists from decades past and model your sound after them, be it Crimson, Tull, Kansas, Genesis, or any of hundreds or even thousands of others, whose sound already defines the somewhat vague genre. Before 1970, a band or artist actually had to come up with something starkly interesting and original on their own. At that time there were no pre-existing patterns to model your sound on if you were looking to break existing boundaries with your music. In the cauldron of musical expression and experimentation surrounding Berklee College of Music in the late 60s, Osmosis was born. Two of the founding members, keyboard player Charlie Bechler and woodwind player Charlie Mariano, were already established jazz sidemen or bandleaders going all the way back to the mid-50s. The other five members including guitarist Andy Steinborn, bassist Danny Comfort, drummer Lou Peterson, percussionist and drummer Bobby Clark, and lead singer Bobby Knox were all somewhat younger and more rock or R&B oriented, but this was a band where everyone had an equal hand in the compositions, lyrics, and arrangements. The dozen tracks on this, their first and only LP, displayed an eclectic range of influences from jazz, rock, classical, psychedelic, and much more, with a heavy blast of originality on every cut. Sure, there were other bands delivering rock-jazz-classical hybrids in the pre-fusion era, coming to mind are Blood Sweat & Tears on the East Coast, Lighthouse in Canada, and out on the West Coast you had Spirit, and the whole Canterbury sound in England led by Soft Machine, but there was no standardized way of making the magic happen, and Osmosis didn’t seem to be patterning their approach after any others that came before them. These were true originals, integrating jazzy sounds and styles into the then-current brand of psychedelic rock with a powerful lead vocal presence. This is one of those recordings that might put the listener off on the first listen, but with every spin it gets better and more interesting. Of course it didn’t last more than one album before they threw in the towel, Mariano going off to Germany to join up with Embryo and eventually team up with Eberhard Weber’s Colours and other endeavors. Steinborn joined the faculty of Berklee, and since moved to Nevada and plays in the Hillside Street Band. Bechler did some other things, but most of the band members have no further credits.

Marty Walker - Dancing on Water – Marty Walker has been a contributing member to the Cold Blue catalog for several years. Appearing as the label clarinetist he has added the occasional melodic interval here and there to recordings by...  (2005) » Read more