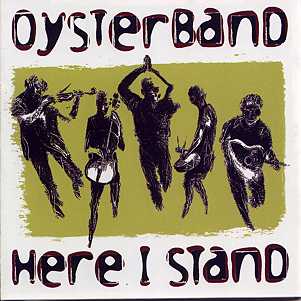 Oysterband (originally The Oyster Band) has been making music in their own unique and developing style for more than a decade. I would hesitate to call them a post-punk equivalent of Fairport Convention, but their role in British Isles folk music is similar. They’ve taken a mixture of traditional songs and dances and brought them together with contemporary styles. It was with Deserters in 1992 that they really came into their own, presenting music that went beyond rocked-up reels and really had an identity of its own. Lead singer John Jones has an impassioned delivery and accompanies himself on melodeon or concertina. He’s backed by Ian Telfer (violin and viola), Alan Prosser (electric and acoustic guitars, mandolin, banjo, backing vocals), Chopper (bass, cello, backing vocals), and Lee (drums and percussion). Songwriting duties are shared by various combinations of the five when they’re not reworking traditional tunes. The arrangements vary from delicate acoustic sounds to powerful rock. Here I Stand is a fine addition to their body of work, finding a middle ground between the reflective mood of Deep Dark Ocean (1997), and the angry raucous sound of The Shouting End of Life (1995). This new collection features 16 tracks, several of which rank with Oysterband’s all-time best. “Street of Dreams,” with its sawing fiddles and catchy melody, is a great original rock-jig, and “Someone You Might Have Been” presents an eerie acoustic sound with impressive depth.