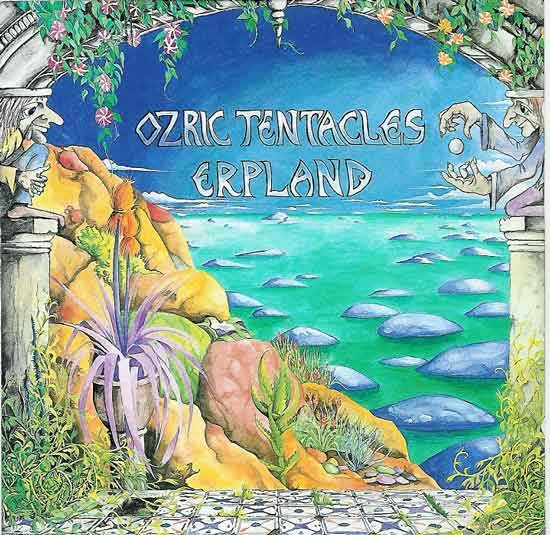 I return to Erpland fairly frequently if only to do a quick check after listening to the nth new title by the band to see if they had always sounded like this. Because it's a somewhat widespread opinion that Ozric Tentacles tend to produce largely the same music, and while that's true to some extent there's some much bigger differences on subtler levels. I'd guess maybe it was the 90s where it seemed like the band became a little too self-aware of their sound to where it seemed their arsenal of squeaky, weird electronic sounds became more of a trademark than the clever engineering the sounds used to reflect, as if the band was almost kind of winking at the audience. You'd get the obligatory reggae track, the high energy numbers and then the more floaty pieces, but it got to the point where you could kind of expect all of them. But it never feels that way on Erpland, which was their second release after the half dozen original cassette lead-ups. When I listen to this it seems like a serious work with a real ear for a sweeping sense of dynamics across the entire album, it never feels like any of the songs are just going through the motions. There are many powerful highlights, the strong opener "Eternal Wheel" that doesn't for a second squirt out something unnecessarily silly, it just floats up and powerfully riffs away. There's "Sunscape," still one of my favorite pieces by the band, as it picks out variations on D minor weaving in some great synthesizer work. The amazing "Cracker Blocks," which to this day is one of the most original atmospheric space works, gloriously chromatic and beautiful. And of course the transcendent closer "A Gift of Wings," which reflects back to one of the band's biggest influences, Gong on their You album and manages to scale the same heights to the point where any separation just completely melts away. And to this day, even though the band has put out some other fine releases, they've never topped this one in its sheer scope and actual seriousness. It's a towering and essential space rock album that in many ways created a genre behind it. And one of the main reasons it is is because of the vast sense of diversity within its pieces, like a watercolor palette with a whole bunch of new, imaginary colors at play.