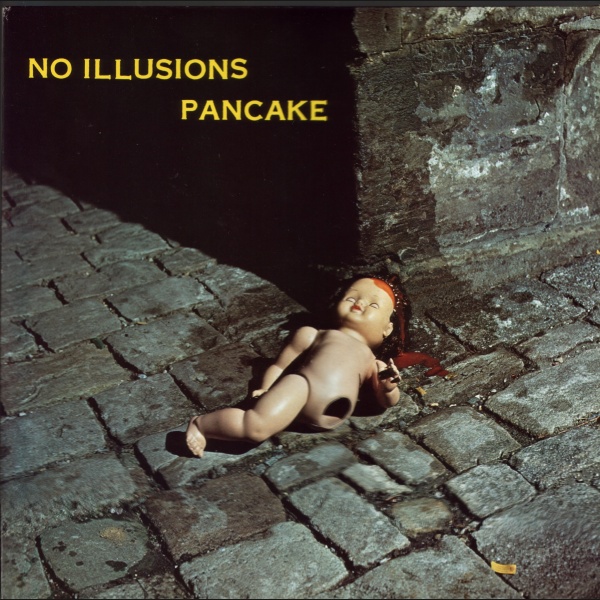 Pancake started life as the psychedelic band Nyrvana Pancake, releasing a single in 1973 (“Open Your Eyes” / “Lonesome Boy”), then in 1974 with a new bass player, decided to shorten their name to Pancake and move in a more symphonic progressive rock direction. During the mid-70s, amid seeming endless personnel turnover, two full length albums Roxy Elephant and Out of the Ashes were released. Prior to the release of the third album, No Illusions, there was another major turnover leaving only founding guitarist Walter Negele and drummer Hans Derer to put together a whole new lineup, which included keyboardist Uli Frank, bassist Ralf Scheibe, and most importantly singer Biggi Zmierczak, the first time that Pancake had a female vocalist. Along with the changes came a group rethink, moving to a less symphonic, more edgy and guitar-oriented sound. Other keyboard players were featured during the recordings, but their tracks were mostly removed in favor of Frank’s. The new sound was definitely still very progressive, with two of the new album’s six tracks (“Dream Delta Land” and “Autumn Leaves”) being multi-part suites clocking in at around nine minutes each, both exceptionally superb. The new prominence of guitar gives the sound a bit more crunch while Zmierczak’s vocals are excellent, if a bit understated in the mix. “No Touch of Illusions” is a strong and straightforward title cut with a memorable refrain, opening the second side of the original LP. Also worthy of note is the five-and-a-half minute “Fire and Rain Song” that has a catchy verse and refrain alternating with more progressive guitar-driven moves, fading out at the end. Album closer “I Try” is more moody and pensive compared to the others, but a powerhouse nonetheless, with a strong keyboard driven melody. There are six bonus tracks, the first three are 1980 demos for the band’s fourth album (featuring the same lineup as No Illusions) that never got past the demo stage (though eleven cuts were recorded and are still in a vault somewhere, a possible future Garden of Delights release?), showing a more streamlined rock approach. In the spring of 1981 the band went into the studio one last time to record another album, this time with German lyrics. Zmierczak left the band mid-session, and was replaced by singer Alix Koch, previously with a band called Frame. The album was completed, but never released. Which brings us to the last three bonus tracks, taken from a Pancake reunion concert in June 2002, featuring Negele, Frank, Derer, Biggi (now Zeisel), singer Rainer Röhm (from the Out of the Ashes lineup) and other musicians. These include a great version of “No Touch of Illusions,” as well as covers of 60s standards “Hey Joe” and the Troggs' “Love Is All Around.” The six tracks that comprise the original No Illusions are arguably Pancake at their best.

Bondage Fruit - Bondage Fruit – Bondage Fruit were formed in 1989, and have finally released their first CD. Leader Natsuki Kido is also a member of P.O.N. (and other groups unknown outside Japan). Like other bandleaders he employs...  (1996) » Read more