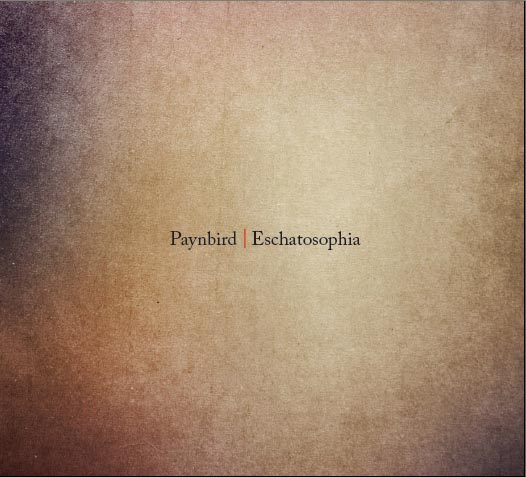 Eschatosophia is Paynbird’s second offering following 2005’s The Street of Seven Stars. The trio from Bergen, Norway, has created an ambitious album that encompasses an eclectic — if somewhat schizophrenic — range of styles and sounds. On the one hand are songs like “Shiny Colors and Beauty Queens” that sound like lost outtakes from a 1966 Byrds session, while on the other extreme is the “Perago-Metus-Atonement-Pavor Nocturnus” suite that juxtaposes grunge with Gothic soundscapes and choral meditations. I guess the easiest label to use would be acid-folk, but there’s a lot more going on in these 18 tracks that also includes smoky, coffeehouse confessionals (“Pearls of Water”) and redemptive folk rock (“Oblivion of Time”). The trio of Erik Olaus, Markus Scholz, and Kjersti Olsen champion a stripped down sound dominated by vocals and guitar, pushed along by a small kit backbeat, though they’re not adverse to layering on piano, percussion, or processed strings when it can help give the tracks a sonic boost. Guest violin from Eli Hydle is judiciously added for extra sweetening, but for the most part this is an outfit confident in their abilities as songwriters and performers. As a concept album the subtext is somewhat murky, though the dreamy and introspective vibe underlying many of the songs hints at larger themes at play. As a marriage of style and substance this collection works on both fronts, even if the references are somewhat obvious. It also works as an artistic statement, even if several listens are needed to dig it.

Hedningarna - 1989-2003 – Readers of this magazine have likely noticed over the last few years the fondness that several on the staff have for artists on the NorthSide label, with Hedningarna consistently getting good reviews....  (2004) » Read more