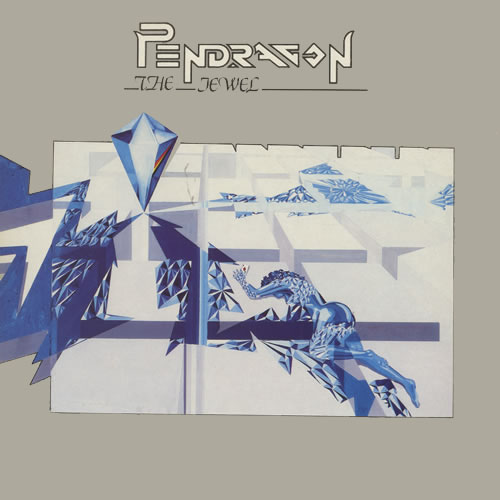 You'd really never know what a classic early 80s Marquee-era progressive rock album The Jewel is by the opener, "Higher Circles," a really abysmal, cheesy number that I'm prone to skip immediately and something of an indicator of what was to come by the mid 80s for the band. But the rest of the album is music I've played countless times over many years, a progressive rock style shrouded in the mystique which was the best part of this much-maligned era of music. Part of the big change is that Pendragon's drummer and keyboard player were different in the early years and less inclined to the more mainstream moves the later line up would trend towards. Like very early IQ and Marillion, there was something of the appealing quality of a band stretching their ambitions beyond their skills, and since this was all being drummed up on during the tail end of the punk revival, it all came over with a lot of vigor and power. Having that sort of intensity combined with the obvious Tony Banks-led Genesis influence, not to mention a touch of hard rock (maybe slight hints of Judas Priest or Van Halen in the mix), gave Pendragon a really cool mix of great melodies, a penchant for long instrumental breaks (especially the "Snowfall" part of the two-tiered track "Alaska" which was essentially a fast-paced vehicle for a terrific guitar solo) and as the album progresses an almost mythical depth to its lyrics and emotions. In fact the only other album I can think of that reaches this almost archetypal level is the end of Cathedral's Stained Glass Stories. This style of the music at the time can be almost unbearably lonely and sad, something Marillion almost perfected by the time Script for a Jester's Tear came out, and in a way it really almost personifies the romantic side of symphonic progressive rock. All of these pieces, particularly "Leviathan," "Circus," "Oh Divineo," and "The Black Knight," I have never tired of over the years, to the contrary they just get more impressive.