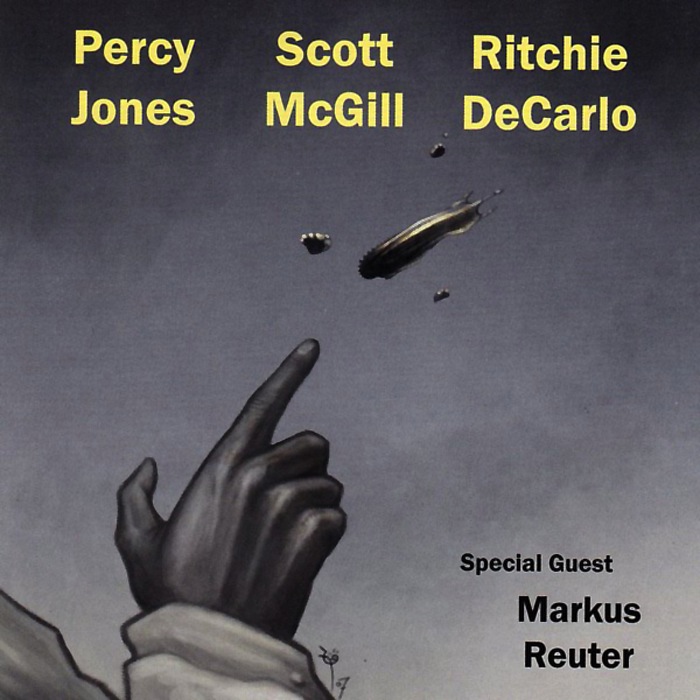 Fasten your seat belts prior to starting the opening track “Menagerie Animato” – it clocks in at only a little under five minutes, but it’ll leave you out of breath and in need of a cigarette. This is an evolved take on the classic fusion idiom at its finest, and from these three fine players what else would you expect? Guitarist Scott McGill should need no introduction; his collaborations with Michael Manring and Vic Stevens are legendary, as well as his numerous solo, collaborative and band works. Likewise bassist Percy Jones, who for years gave Brand X their instantly recognizable bottom end sound, and of late has been a mover and shaker in NYC with his own band Tunnels. Drummer Ritchie DeCarlo is perhaps lesser known, but has been doing session work and touring with various artists for years, and brings precision and finesse to the collaboration at hand. Joining the trio on a couple of the album’s tracks is esteemed touch guitarist Markus Reuter, where the quartet tend to take a slightly more laid back approach. There is such an abundance of virtuosity and lyricism in these eleven instrumental cuts, as the trio intrepidly explores a variety of complex sounds and timbres with seeming sure-footed effortlessness. The acoustic track “Two by Two” is especially potent, sounding like an out-take from Larry Coryell’s Spaces sessions. A great set beginning to end, and hopefully not a one-off, because I’m already looking forward to round two.

Isildurs Bane - Lost Eggs – Although they take their name directly from the Tolkien novels, don't be too quick to write this band off. Lost Eggs is a compilation of material recorded from '76 to '93, spanning the history of this...  (1995) » Read more