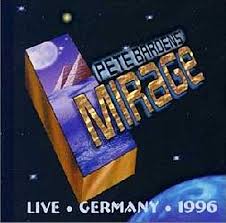 Two live albums by a new band prior to any new studio is an unusual policy. Live in Germany is marginally better than the last live disc (which was an ill-fitting convergence of Camel and Caravan) and only two members have carried on since that last incarnation (ex-Camel keyboardist Peter Bardens and guitarist, Steve Adams). Add two additional new musicians, Dave Cohen (drums) and Desha Dunahoe (bass) and you have a line-up very similar to Camel, circa Moonmadness or Mirage. Even though the bulk of the set list is akin to the last album, except for the addition of the organ groove on “Never Let Go”, I get the feeling that this CD is more of a representative of the touring entity itself rather than a group generating any new musical output (at least yet). Adams is still the main point to focus on during the bulk of the set. His adaptation of Camel’s lead guitar work is maturing true to form without being derivative of original phrasing. I should also comment that this disc has a much better live vibe and just generally a better feel. Maybe time on the road with a consistent set of players is exactly what Bardens has needed to rejuvenate interest in live performance again. From the comments I heard about the lone gig in the San Francisco Bay Area, their show went over quite well. Now, if there was some new material to match with the strength of this output, I’d be a much happier reviewer.