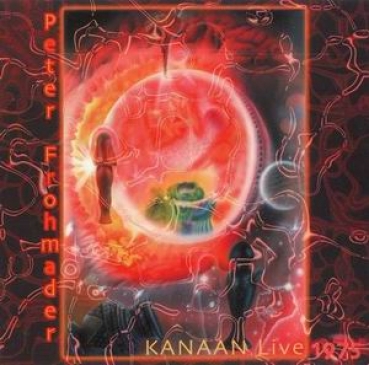 Peter Frohmader was in a number of groups in the early 70s that predated his tenure with the moniker “Nekropolis.” Kanaan is one of these groups, presented here live in concert in 1975. This is krautrock of the trippiest, most freaked-out kind. The opening, “Bizarro,” is a psychedelic mélange of drums, voice, and electronics, sounding a lot like the early music of Ash Ra Tempel. It is free, improvised, and ardently experimental with all kinds of wacked out effects and trickery. “Rupscake” moves into more riffing, jam rock territory with Frohmader pulling out his heavy bass and backing up the bizarre distorted Rhodes of Michael Schobert. “Spaced Out” keeps this improvised rock feel, but does so in a laid-back manner with lots of effected voice and heavy Jannick Top-like bass, until almost half way through it rips into a quick moving Gong-like jam for the midsection. The 21-minute “Muzak für Beknackte” is the album’s centerpiece, and Uwe Rudiger takes a break from the drum kit to play bizarre trumpet over the electronics. The piece takes on many twists and turns including a bizarre, effected bass solo towards the end of the piece by Frohmader. “Starnbereger Prinzenschießen” is mostly a drum solo, but ends up in a pretty intense rave-up at the end. The last track of the Munich set is another quickly paced jam, with a bass riff reminiscent of Gong’s “Flying Teapot.” The majority of the CD is finished off with two “bonus tracks,” two short little pieces that actually don’t seem necessary after almost 70 minutes of music. But who’s complaining? If you like improvised, crazed krautrock, this will more than fit the bill.