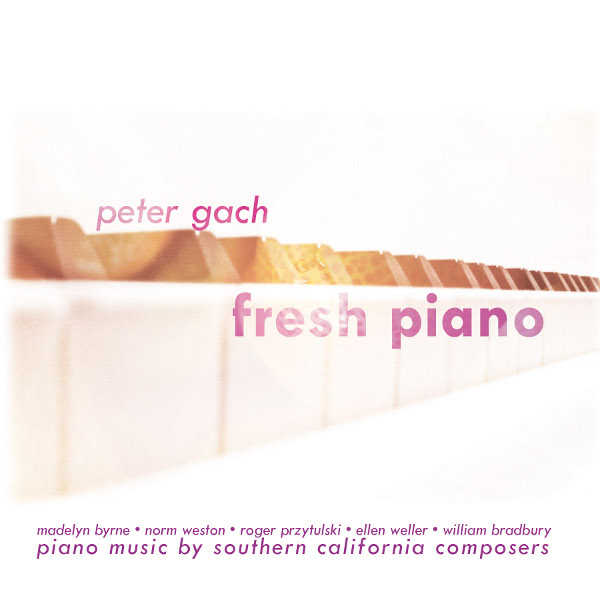 Californian pianist Peter Gach here presents a set of pieces by five different contemporary composers from his home state; a variety of styles are represented, from decidedly lyrical to angular and rhythmic, and there is even some use of electronics. Gach’s playing adapts to the needs of each piece, and given that these are unfamiliar compositions, it’s hard to say what his personal voice adds. In general, these works do not adhere to specific schools of composition, but range widely, choosing elements from the history of music (mostly European) and synthesizing them into new hybrids. Gach starts off with a piece from Madelyn Byrne that includes some computer sounds to expand her imagery. Norman Weston’s “Sonata” is a wonderful brief bout of angular lines and jarring chords; Roger Przytulski gives us an eclectic piece inspired by Charles Ives and Fats Waller, among others. The parts of Ellen Wellers’ “Jazz Suite” purport to adapt 12-tone techniques into funk and ragtime, and while they succeed as individual entities, fail as actual funk and ragtime, so maybe it’s best not to know the titles. In William Bradbury’s “Chants Music” there are wonderful nods to Gregorian chant and folk dances. Madelyn Byrne’s “Suite for Piano and Computer: The Elements” finishes off the album with an expansive moody palette of chords and sampled singing. The whole set is marvellously selected and performed, and a welcome reminder that pianists need not limit themselves to the standards by Chopin, Rachmaninoff and the like.