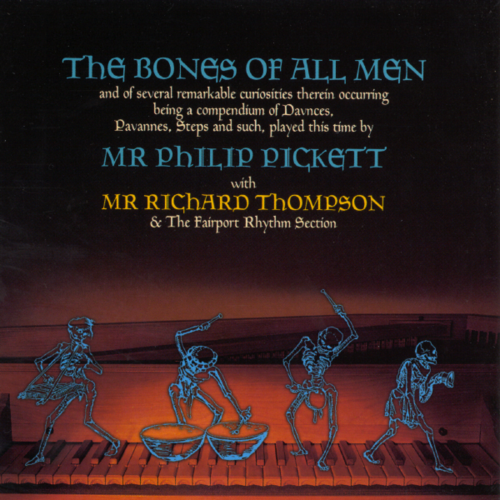 The subtitle on the cover continues after the title: “and of several remarkable curiosities therein occurring being a compendium of Dances, Pavannes, Steps and such, played this time by Mr Philip Pickett with Mr Richard Thompson and The Fairport Rhythm Section.” On the paper top cover that come with it, retailers are advised to file it under Classical, Folk, or Pop, no doubt leading to some confusion in stores. Philip Pickett’s other releases are most likely found in the Classical section, containing selections of Early Music through Bach’s time, more or less. On this one, he steps outside the staid constraints of historical reconstruction and into a kind of Early-Modern fusion that has really only been done before by the band Gryphon. Pickett’s years of playing guest spots on albums by Fairport Convention, the Albion Band, and others has really paid off. His melding of medieval instruments (particularly krumhorn and recorder) with modern ones (electric guitar, bass, and drums) highlights the connection that British and Celtic folk music has with the music of those earlier times, times when the distinctions between high-brow and low-brow were much fuzzier than they are now. What I really want to emphasize is that this disc is fun. It never fails to bring a smile to my face. The delicate, tinkly virginal (a relative of the harpsichord) which starts the disc is joined by the electric instruments, particularly Thompson’s guitar, and my head starts bobbing. Pickett is a virtuoso on his chosen instruments, and Thompson is his perfect foil, playing the melodies straight enough to fit in but edgy enough to add a lot of excitement.

Polite Force - Canterbury Knights – Mark Hewins’s longtime jamming project released a disc in 1996 after many years of existence in local obscurity. The band had a floating set of players as wide ranging as Richard Sinclair and...  (2001) » Read more