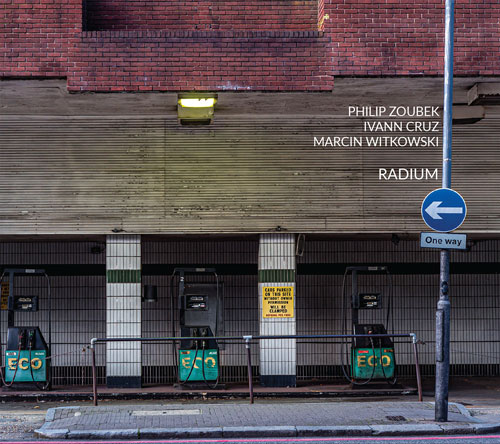 Ivann Cruz is the “C” in TOC, and an accomplished and adventurous French guitarist (we reviewed his solo album Lignes de Fuite from 2017 which was a powerful statement as well). The other players here, Philip Zoubek (Austria and Germany, prepared piano, analog synths) and Marcin Witkowski (Poland, prepared drums and electronics) I know next to nothing about, other than they have been working with Cruz in this collaborative free improvisation effort for several years, and in December 2017 they teamed up with engineer Peter Orins to record their first release, Radium. While one tends to consider ‘free improvisation’ to generally mean some form of jazz-related endeavor, such is not the case here. What these three improvisors have done across nine contrasting tracks (each named for various elements in the periodic table) is completely outside of any genre of music, instead focusing on the exploration of sound by deconstructing their instruments in an electro-acoustic setting, dispensing with cadence or melody or anything that might be recognized as such, in a wholly creative process that starts at ground zero and creates an entirely new and open soundworld to explore new musical territory. As one listens to this, it should be understood that this music could not be scored, and as improvisation might never repeat (although there is some repetition in a few places); it represents an ongoing process of finding new and unexplored sounds, constantly intertwining and evolving independently in real time. There are a lot of electronic sounds in the mix, as well as sounds that are just not readily identifiable (prepared this or that), but these players don’t look to shock the listener, and instead have devised some truly interesting and enjoyable creations that evolve completely outside of all traditional boundaries.