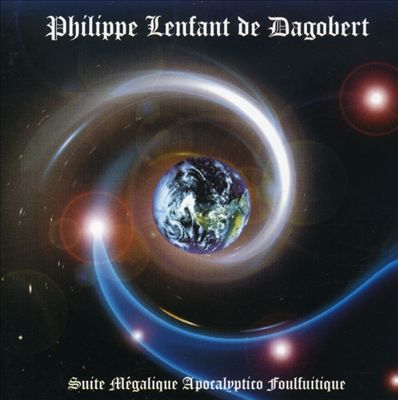 Well, what can I say? His name sounds pompous, as does the hyperextended title of the album (and 20 minute opening track), and three guesses what the music sounds like? Imagine early Vangelis on steroids with few ideas using cheesy keyboards, or Golgotha's Unmaker of Worlds (remember that one?) with no vocals or guitars. That pretty much sums up the first twenty minutes or so: heavy chords pounded out on digital keys with minimal melodic or thematic development. If you last through that ordeal, the 35 minute "Suite Jupiterienne Semi Jerichoidale" moves into more electronic Tangerine Dream-like territory that, on it's own, is nice enough, but decays whenever those heavy and simplistic digital chords come back to destroy everything in their path. There are some very nice ethereal and sequenced segments within, which leads me to the belief that Dagobert's forte is more in the electronic realm, rather than as a keyboardist. The closing track "Fantastic Refnique," at seven minutes is much like the first, but nine minutes of virtual dead space at the end (low level sounds of synthesized water drops) do little more than irritate. Certainly not a complete disaster, but at the same time not the most impressive thing Musea has released either.