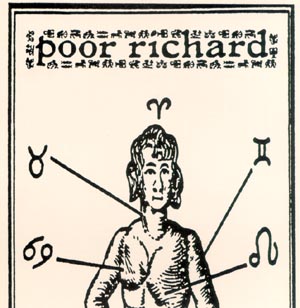 Knees, Reins & Feet is Poor Richard’s debut CD after releasing two independent cassettes. They are a young band, both as musicians and as a band, formed in 1990 and now on their third drummer. Poor Richard recorded the music on this CD in the summer of 1993 while they all still lived in Arizona. Their music is difficult to categorize in that it encompasses several genres. To me they sound similar to bands like Gentle Giant, BeBop Deluxe, and Crack the Sky. That is, their competent musicianship and complex intelligent music skips back and forth between rock and progressive rock. The first song "El Ladron" is a down and dirty rocker with gritty vocals and funky organ riffs. It is one of those songs that grows on you the more you hear it. The next song "Dive" is a quiet ballad that picks up the beat half way through. Now to confound descriptions further they kick in with "Darkroom," a neo-psychedelic song with a heavy beat and great organ riffing! They even throw in some dissonant electric guitar. The last two songs, "Clockwise" and "Free to Daydream," are the closest to progressive rock on the CD and are also, in my humble opinion, the jewels in the crown with soaring guitar solos and excellent synth melodies. In addition to the music, Poor Richard elected to go with a picture CD that duplicates the album art, The Anatomy of Man’s body as govern’d by the Twelve Constellations. This art contains and explanation of the CD title. Poor Richard is a band worth investigating.

As the debate over the meaning of the word "progressive" (as it applies to rock music) continues, the loosest interpretations generally define it as anything that eschews the mainstream pop-song format and commercial aspirations. That's not to say that all music of this type is necessarily somehow inferior – there has been a lot of brilliant pop through the years: Queen, 10cc, Split Enz, The Beatles... with songs that certainly stretch the envelope and offer something more than the standard fare, and probably rightfully deserve the label progressive. And then there are those artists that stay safely within mainstream confines, yet seem to draw inspiration from the heavy hitters, occasionally throwing in a keyboard run or ethereal vocal passage as a pointer. In this category fall the likes of Toy Matinee, Tears for Fears, and so on... and now, Poor Richard, a quartet from Illinois featuring guitars, drums, keyboards, and a bassist who doubles on vocals. After the opening track "El Ladron," which recalls Hogarth-era Marillion embellished with some Gentle Giant ideas thrown in, this five song CD-EP turns to a more mainstream sound that remains safely within the confines of the pop idiom. That's not a knock - these guys do it very well - the musicianship and writing are of the highest caliber, and the production is quite good as well; it all works together to offer a sensible approach with good melodic hooks that should get them noticed. The remaining four tracks range from very commercial ("Dive") to some that pack a bit more of a rock punch with some overt and noticeable progressivisms ("Darkroom," "Clockwise"), but by far the best track on the disc is the closer "Free to Daydream," not because it's particularly proggy, but simply because it's an excellent all around pop song.

White Willow - Ignis Fatuus – This one was worth the wait! This new band from Norway plays a rich blend of folk and symphonic rock, sprinkled with a generous helping of classical influence. Fronted by the gorgeous female voice of...  (1995) » Read more

Brian Eno - Another Day on Earth – Brian Eno’s first set of new songs is a welcome follow-on to his collaboration with John Cale, Which Way Up. The opening cut, “This,” begins the subdued eleven song set and it is a...  (2006) » Read more

Ezra - Shapes – As heavily featured as keyboards are on Shapes, It is surprising that Ezra is a three piece outfit consisting of vocals/guitar, bass, drums — and no keyboards. In fact, I'd say that the keys are...  (1996) » Read more

Francesco Buccheri - Journey / Second Journey – Italian synthesists are a rare breed and only a few of them did anything of note (Cacciapaglia, Baffo Banfi, and very few others). Buccheri was a very obscure musician with a pronounced Teutonic...  (1996) » Read more

Ougenweide gets all medieval on us