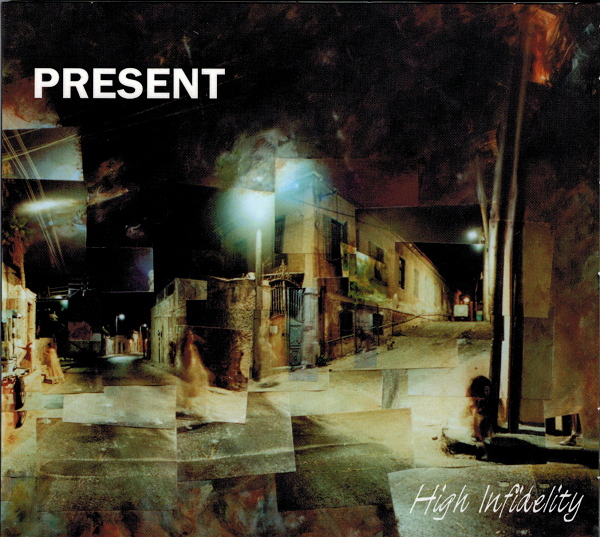 Have Present evolved from Univers Zero to Art Zoyd? Well, not quite, although Dominic Ntoumos' trumpet strongly reminds me of Gerard Hourbette's approach on Art Zoyd's early albums such as Génération sans Futur. However, the rhythmic combination of Dave Kerman and Keith Macksoud leaves no doubt that it is Present who have returned. Featuring an expanded line-up of eight musicians (nine if you count soundman Udi Koomran), this is certainly the group's most ambitious project to date. High Infidelity features three long pieces dominated by the six-part "Souls for Sale." The usual dark, brooding sound is back, although the addition of sax, cello, and trumpet to the mix expands the sound of the group to far more stridently menacing proportions. As the band locks in on an insistent, frightening dirge, the horns cry dissonantly, furthering the feeling of impending doom as the basic riff undergoes long developmental phases. These tend to be complex, variant lines over the same forward march with occasional volume drops to the vocal sections. The overall effect is intensely disturbing, undoubtedly a bullseye for the group. The final two pieces clock in not far from either side of ten minutes. Pierre Chevalier's "Strychnine for Christmas," unsurprisingly, is keyboard inundated with Mellotron strings and piano, a two-parter with typically Present-like lyrical imagery (sorrow, lack of hope, etc.) "Rêve de Fer" is, perhaps, the album's most complex piece, with a ton of interlocking instrumental lines that evolve into what could be Present's version of the Peter Gunn theme. Overall, I felt malaise, discomfort, and uneasiness, which, undoubtedly, is the whole point of High Infidelity, a bigger Present, yes, but one no less foreboding.

The bleak occasion of Roger Trigaux's seventh nightmarish vision is filled with extreme trauma. This time out, the composer has seen fit to fill an orchestral gap by adding sax, trumpet, and cello to the arrangements and what a drastic change it has made for the group. The core elements of the band remain the same for the third time, with the ensemble finding solid footing in these three new pieces. Roger's son Reginald does his utmost handling the lead guitar chores. He is especially ominous on the 27-minute epic "Souls for Sale" as the six passages magnificently spiral down into a seriously desolate mood. Part five even has a flute Mellotron that serves as a grim transition theme to the reprise finale. Keyboardist Pierre Chevalier's contribution to the album, "Strychnine for Christmas," provides a murderous point of view as the piece opens with a cello offset by a diagonal guitar part and an industrial syncopated bass and drum unison. Again at the formidable skins is 5uu's Dave Kerman, who must be soaking in the dread like a sponge as his own band's contributions can be easily linked here. Closing the disc is Trigaux's second major piece, "Rêve de Fer," which starts subtly with a Henry Cow-ish tone with anguished free-jazz blasts by saxophonist Fred Becker. Still on the brink of modern musical Mecca, Present has many appreciators to confront in a marketplace full of confused Tool fans ripe for an alternative black path.

For their latest release, Present pays tribute to REO Speedwagon's classic 1980 album. Their remake of "Keep on Loving You" just rocks!! Oh wait... that's just a terrible nightmare. Present returns with the same core line-up from 1999's No. 6, including founder Roger Trigaux on guitar and vocals, son Reginald Trigaux on guitar and vocals, Dave Kerman on drums, Pierre Chevalier on keys, and Keith Macksoud on bass. Several guest musicians contribute horns, cello, and accordion to the tunes. The horns and cello are actually prevalent throughout the CD and give this album more of a chamber rock music sound than previous Present material. Overall, the trademark Roger Trigaux somber and dark mood permeates the compositions and is evident even in the sections where he personally isn't playing. David Kerman provides his usual mastery behind the drum kit. That guy is simply an awesome player. Check out the drumming in Part 4 of "Souls for Sale" for example. He also shreds in the alternating 8 / 9 time signature parts of "Strychnine for Christmas." Both Trigauxs contribute tasteful guitar parts, but while intense in select spots, the guitar seems understated compared to earlier efforts. There are some sparse lyrics scattered amongst the album's three songs, but most of the release is instrumental. Chevalier's keyboards are featured a lot on the album, and his crazy distorted organ solo in "Rêve de Fer" rules! If you're a fan of Present, you'll surely enjoy this release. If you're not familiar with them... Well, fix that by going out and buying this CD!

High Infidelity is Present’s seventh release of intelligent music that extends the tradition laid down in Trigaux’s previous releases. This new CD contains three songs: "Souls for Sale," "Strychnine for Christmas," and "Rêve de Fer." "Souls for Sale" opens the disc and is immediately in your face with Frippish guitar riffs, dissonant chords, and interesting themes. "Strychnine for Christmas" is a dark brooding piece about a father who poisons his children, not an uplifting story, but the music is excellent with some cool Mellotron phrases thrown in the mix. The CD closes with "Rêve de Fer," the shortest song, but no slacker at 9:24. Heavy beats, dual guitar lines, and a laid back approach present another facet of this excellent band. If you like King Crimson, Univers Zero, Magma, Heldon, Pinhas, etc., then this latest release from Present is for you. Highly recommended.

Cro Magnon - Zapp! – An interesting newcomer in the 'Chamber Music Rock' subgenre, this is a Belgian five piece featuring a lineup of dual violins, keyboards, alto and baritone saxes, and bass. Naturally, as might be...  (1993) » Read more

Philharmonie - Nord – It seems like only about six months since the last Philharmonie disc, these guys are a hard working group for sure! The original guitar trio of Frederic L'Epee, Laurent Chalef and Bernard Ros are...  (1994) » Read more

Philippe Lenfant de Dagobert - Suite Mégalique Apocalyptico Foulfuitique – Well, what can I say? His name sounds pompous, as does the hyperextended title of the album (and 20 minute opening track), and three guesses what the music sounds like? Imagine early Vangelis on...  (1996) » Read more