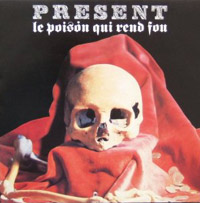 Generally speaking, spin-offs are never a good idea, but if you count Present as a Univers Zero spin-off then it's a terrific exception to that rule. Le Poison Qui Rend Fou was the band's sophomore effort, put out by the then young Cuneiform label, following on Atem's Triskadekaphobie, the two of them sharing the same CD release until they got their own remastered versions. Le Poison is a masterclass of what tends to be called avant-progressive these days, a more guitar-oriented approach than what Univers Zero had been doing up through their early albums (with of course both Roger Trigaux and Daniel Denis coming over from that group). The spectre of Magma hangs very low in the distance but tends to imbue the proceedings with its martial subnote and everything hangs on the balance as the guitars wail away over complex, punctuated piano work. It's all extremely urgent music with great intensity, but hey, instead of hearing what I have to say about it, here's some choice quotes from my coworkers as I have been playing this. "Hey that sounds like circus music." "It sounds to me like a psychological thriller" (I reply "Alfred Hitchcock!") "Flight of the Bumblebees!" "It sounds like knock-somebody-off music." But yes, it is almost the very incarnation of approaching psychological dread, after all that is part of a human skull sitting on red velvet on the cover surrounded by bones and coins. And that's not a bad metaphor at all for the music. But what a brilliant work it is to inspire such catharsis, and such an emotional release it is, performed by brilliant musicians not compromising in any way during a musical era where Journey and Huey Lewis and the News were topping the charts.

Aqua - Aqua – Aqua were a German band who had some success in the 80s as a mainstream hard rock band. What is little known is that they began as a progressive rock band, but unfortunately never released any music...  (2011) » Read more