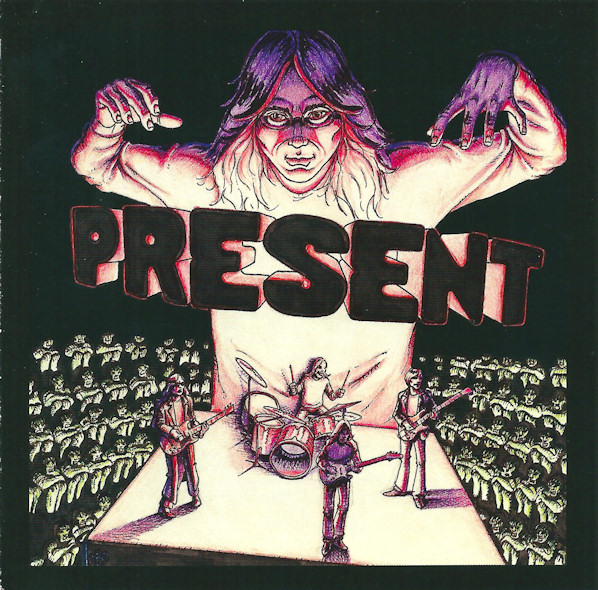 What a treat this was — to hear a live recording by the enigmatic Present. Led by Roger Trigaux, this band has unfortunately dwelt in the shadow of his alma mater, Univers Zero. With only three studio releases to his credit since forming Present in 1981, Roger is a composer whose oeuvre is shrouded in mystery, leaving in its lengthy absences quite an obsessive curiosity for what he will do next. Live! features the following : one track from C.O.D. Performance; two previously unheard pieces; and finally, the monstrous "Promenade au Fond d'un Canal" from his first album, Triskaidekaphobie. This release captures a very raw live sound, unencumbered by technical razzle-dazzle. Roger and his son Reginald divide the guitar duties between themselves, and cover all the bases of playing: tortured, sustained solos; dissonant chordal work; multi-layered interlocking patterns; even some bluesy flourishes. They practically strangle every last drop of blood out of the instrument. I marvel at Roger's ability to pace his compositions. It always leaves you guessing. "Promenade" is a veritable textbook in how to mark a piece with drama and contrasts. More than ever hitherto vocals are employed, and this was unexpected, especially on a live recording. I don't know who is doing the singing, but it is very evocative nonetheless. The hushed, dull tones of "Alone" are very appropriate for the setting, a contrast to the Beefheartesque wailing on "Laundry Blues," and the grunge-oid French intonations of "Contre."

Describing Roger's music isn't a piece of cake by any means, but it shares a similar musical vocabulary to his one-time partner / usual Present drummer, Daniel Denis. Trigaux tends to go for a more visceral, from-the-gut approach, probably because he is a guitarist. It is a peculiarly Belgian way of doing things that I find has its roots not only in music ("Contre" bears the fingerprints of Stravinsky), but in Flemish painting: Peter Bruegel often comes to my mind when I listen to Present. Is this a sort of threnody for souls in torment? A Dostoyevsky-inspired dissection of evil? Or a warning, along the lines of Bruegel's "Triumph of Death"? That kind of brooding imagery comes alive in the landscape of Present's work. The ambiguity of possible interpretations is what makes this criminally underrated music so profound. Don't miss it.

Present is back in black. When we last heard from this Belgian band — 1995's studio reformation disc COD Performance, the lineup consisted only of Roger Trigaux and his son Reginald, both on guitars, vocals, and percussion. This latest live disc, recorded December of last year in Germany, features a full lineup including Bruno Bernas on bass and Dave Kerman (U-Totem / 5uu's) on drums. What the studio album lacked in aggressiveness and raw power is more than compensated for here; one and a half tracks from COD are featured, as well as one from the first album ("Promenade..."), and one new tune. With this dual guitar approach and the band's predisposition to dark and brooding themes (Roger Trigaux was one of the original members of Univers Zero — 'nuff said), the complex compositions and edgy improvisational guitar stylings deliver on what Crimson albums like "Starless and Bible Black" only hinted at, making it clear that — like Univers Zero, 70's Crimson, Magma, and so many other bands — Present are best heard in a live setting. The only negative one could say about the disc are the painfully twisted and sinister vocals on the first two tracks, which do take a few listens to get accustomed to; but on the plus side, most of the disc's fifty-odd minutes are purely instrumental. Fans of guitar-driven complex prog should find much herein to enjoy.

On again, off again, and on again, this mini-tour eventually did occur (with 5uu's David Kerman subbing for the rumored Daniel Denis) and is captured on this fine release. Along with Kerman, is frontman Roger Trigaux and son Reginald (both handle keys, guitar, and vocals) and bassist Bruno Bernas. The opener is "Laundry Blues" and it's a killer. Imagine Philharmonie gone heavy, very Crimson-esque and very dark and you'd have some idea of what this sounds like. Kerman's drumming is hot, and the Trigaux boys add a lot of grotesque Heresie-like gutteral vocalizing. The second tune, "Contre," is even more intense, more jamming than the previous one. Things take a turn for the worse with the third tune "Alone," with its annoying screaming vocals and horrible lyrics ("Everything is bad, nothing is real") repeated ad nauseum. This is vengeful and angry stuff, and it doesn't have much to do with the original neo-classical sound of the original band. But they close the disc out with a new rendition of the classic "Promenade au Fond d'un Canal" and this brings the more familiar, more enjoyable Present stylings to the fore. Note the added vocals to cover the virtual lack of keyboards. This is easily the highlight of the disc. Overall a pretty strong album, not without its problems to be sure, but very solid. Great to hear these guys burning like this, hopefully more music will materialize...

Barrock - Oxian – Barrock is a band I want to like very much. Their music is strongly reminiscent of classic early 70s Banco (one of my favorites), both in the fluid contrapuntal writing and creative orchestration, as...  (1995) » Read more

Tempest - Turn of the Wheel – Tempest is led by Lief Sorbye (formerly of folk group Golden Bough). This is their first album for the Magna Carta label and their fourth disc overall. Jigs and reels and storytelling: that's what...  (1996) » Read more

Soft Boys - Nextdoorland – I don’t think I would get much argument if I claimed that the Soft Boys were, in their original incarnation (1976-1981) the prime exponents of psychedelic punk music. The sheer lack of...  (2003) » Read more

Lalo Huber - Lost in Kali Yuga – Lalo Huber is the keyboard player for Nexus and this is his first solo album. This 79-minute disc is mostly instrumental with a couple of vocal songs. The centerpiece of the disc is the four-part...  (2011) » Read more