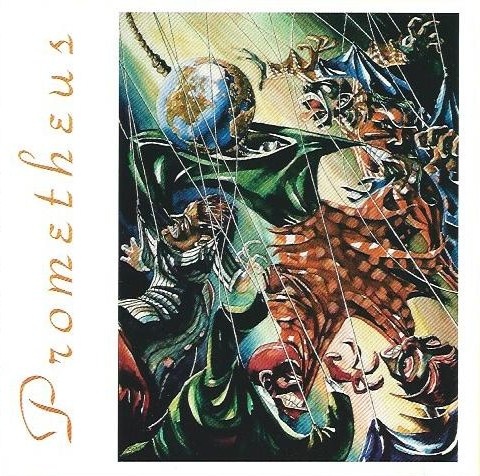 Prometheus is led by the dual guitars of Steve Ball and Sanford Ponder. Although Ponder was one of the original "Private Music" gang, don't let that fool you into thinking that this is some type of wimpy New Age album because it's not. Almost all the tracks are fast-paced, heavy-guitar, wreck-the-bed rock and roll. Odd time signatures, Hammond organ, blazing solos, and "the long song" are always a plus, and Prometheus uses just the right amount of all of these ingredients to make a tasteful album. The interplay between guitars is fantastic and the songwriting is quite strong too. The twin guitar work is reminiscent of Gamalon or even recent recordings by Fish. While many twin guitar bands fall into the trap of having one person essentially doubling the other, Prometheus proves that both guitars can complement each other and add something greater than the sum of the individual parts. Recent King Crimson addition Pat Mastelotto plays drums on the album, though on the whole the drums are too low in the mix. Robert Fripp's influence abounds as well – the patented tritones from "Assault on the Consensus," the polyrhythmic ostinatos of "The Spectacle," and the Frippertonic-esque "Redemption." Other than the slight complaint about the mix and the drums this is a really good album. "Assault on the Consensus" is one of the best songs and illustrates all that is good about the album – great solos by all instruments, nice instrumental sections, and interesting vocal parts. It's all there. Are these guys Greek gods or something?