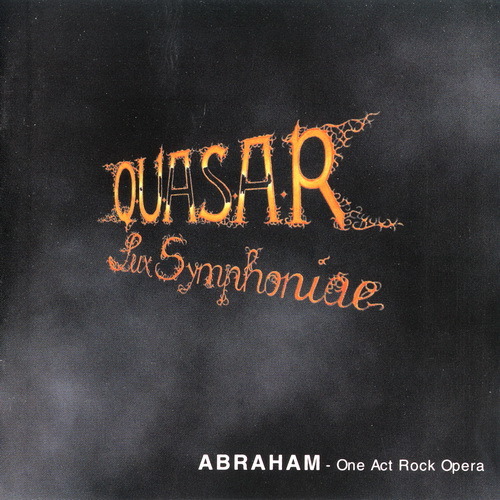 First, let's clear up any confusion: This is in no way related to the British neo-symphonic group Quasar that once featured Tracy Hitchings as vocalist. Instead, QLS is an Italian four-piece core band of Roberto Sgorlon (gtr, voc), Paolo Paroni (keys), Fabrizio Morassutto (drums) and Italo Cigainero (bass). In addition, several more vocalists add the parts of Sarah (Annalisa Malvasio), the voice of God (Giorgio Turcati), Ishmael (Hansi Fuchs), and the Pharaoh (Thommi Muller). Abraham's parts are sung by Sgorlon, in this ambitious attempt to create a rock opera based on the life of Abraham. The music was composed by Sgorlon and Paroni, while lyrics were written by Loris Furlan and Fabio Giacomello with spiritual collaboration from Franco Cautero. Musically, as the band's name implies, the approach is intensely symphonic, lush with orchestral synths and powerful dynamics, the instrumental sections painted with soaring guitars and colorful keyboards. The vocal sections are supported by more anchored stylings, vaguely recalling Procol Harum, Camel, Van der Graaf, and the more gothic sounding neo-prog like Asgard or Tale Cue. The vocals are, for the most part excellent — adequately conveying the story and emotion behind the English lyrics, and although the pronunciation is not always the best, it doesn't detract from the outcome. The loud and rocking passages are balanced well with the more quiet and introspective moments in such a way that the music flows quite well throughout this two disc set. There are many noteworthy tracks: "Sodom," which opens the second disc, builds tension with guitars and keys atop a drum solo, before the spoken words of God and Abraham give way to a powerful rock foundation topped off with Hammond musings, flowing directly into some strange and twisted choral arrangements, making it one of the most interesting. Choirs are used generously throughout, but not to excess — tunes like "The Purifying Fire," "Sacrifice," and "Berit" illustrate this well. 'Tron is used when the need calls, as in the disc one closer "Hospitality." The longest track here is "Ishmael," clocking in at nearly ten minutes, covering quite a bit of territory in the process, from Floydian vocal section to spirited rock jam with intense keyboard soloing. QLS is definitely a winner, and a total surprise to boot. Solidly in the symphonic prog vein, they eschew most of the cheesy and derivative neo-baggage and offer a set that — while quite lengthy — should please most fans of this genre.

Quasar Lux Symphoniæ is a new Italian outfit that has made its entrance into the prog world with quite a bang. Abraham is a one act rock opera spanning two CDs, that is almost Wagnerian in its ambitiousness. With recitative-like dialog, grandiose arias, and extensive instrumental breaks which utilize themes and leitmotifs introduced in the "Overture," the work tells the Old Testament story of Abraham. If all this sounds slightly pretensious, well... Musically Abraham is sort of a mixed bag. The instrumental sections tend to be in a somewhat neo-proggish style, with a basic rhythm section supporting either a guitar lead over keyboard pads or a keyboard lead over guitar power chords. Within the confines of this genre, though, there is some very good music here. The guitarist, Roberto Sgorlon, seems to have some prog-metal influences, evident in his digital distortion laced leads as well as his acoustic style. The keyboardist, Paolo Paroni, is the most versatile of the bunch, serving up sampled analog synth leads, huge walls of digital synths, and long Romantic-styled solo piano interludes. Unfortunately, the plodding, repetitive rhythm section, the typical downfall of the neo-prog style, is here as well. The vocal pieces, featuring both male and female vocals, come in a variety of styles. There are driving, aggressive neo-proggish songs, as well as pieces that can best be described as lying somewhere in between a pop ballad and something from an Andrew Lloyd Weber musical, probably closer to the latter. Still other parts of this work feature dramatic dialog over bare synths or a huge baroque choir. Annalisa Malvasio, who sings the part of Sarah, is quite a strong vocalist, and her songs are among the high points of the entire double-CD. The vocals are all in English, though there is a fairly thick accent at times, making it hard to understand the words. Overall, this release is rather impressive in its scope and zeal, but the music is not quite as compelling. In the end, your mileage with Abraham will probably depend on your feelings about neo-prog and somewhat bombastic, double album-length "rock" operas. Regardless, its hard not to admire the ambition of this new group, or deny that progressive music has been without an epic work like this for quite some time.

Howard Riley & Keith Tippett - Interchange – A rare live duet performance from December 1993 was captured on tape between two of the foremost jazz pianists and improvisers in the world. Riley and Tippett had collaborated twice before, taking...  (2003) » Read more

Tipographica - The Man Who Does Not Nod – Although this fabulous Japanese quintet made a big splash with their self-titled debut last year, that album was actually recorded in 1992. This new release, a collection of seven live performances,...  (1996) » Read more

Athena - Inside, the Moon – I remember the first time I heard Dream Theater. I thought, "I bet a lot of bands will go for this type of sound in the future." Just when I was beginning to think I was wrong, Athena has...  (1996) » Read more

Giles > Giles > Fripp - The Brondesbury Tapes – The early exploits of Giles, Giles and Fripp have always been a footnote considering the impact of the first King Crimson album on unsuspecting English and US audiences. Their only album, The Cheerful...  (2002) » Read more