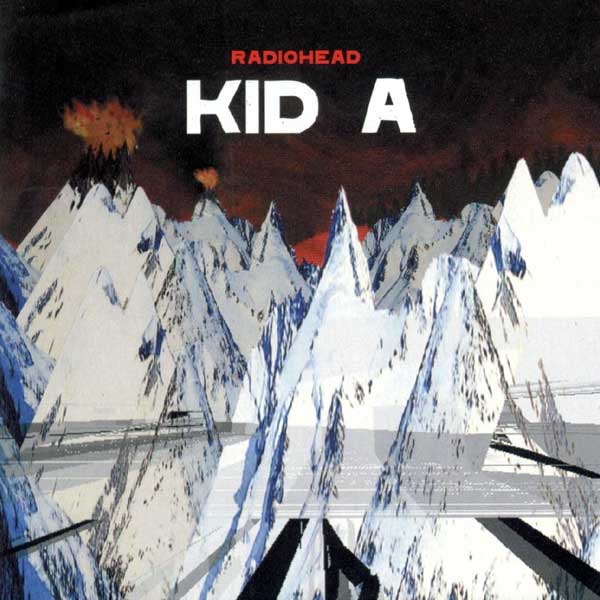 OK Computer showed a rock band reaching beyond the conventions of commercial music, yet somehow managing to remain commercial, selling millions of albums and impressing a lot of non-mainstream listeners with the sophistication of the songcraft. With Kid A, the boys from Oxford take another step away from the middle of the road, and find their commercial appeal apparently still intact. There are ten tracks on the disc, and not one of them could really be called a song in a conventional sense. The melodies meander over soundscapes more than chords, guitars are barely recognizable, rhythms skitter around rather than propelling the music. Just as a person’s life usually doesn’t fit into a story arc (problem-struggle-resolution), the songs of Kid A don’t usually follow a musical arc. It’s more like the soundtrack to a journey, where you pass from one realm into another, but problems once presented aren’t necessarily resolved by the time you enter another realm. Taken as a whole, there is a sort of progression, from the quiet and slightly morose “Everything in Its Place” to the driving-nowhere chaos of “The National Anthem” to the uneasy peace of “Motion Picture Soundtrack.” Trumpet, sax, and trombone blow crazily throughout much of “The National Anthem” over the top of an unswerving one-chord bass line. This is pop? There’s a lot of shimmering Eno-esque ambiance and simple electric piano, a lot of highly processed sounds, a nifty 5/4 on “Morning Bell,” and many other interesting touches with which the record insinuates itself into the brain. What does it mean? I have no idea. There are no printed lyrics (and no credits beyond the song titles) and Yorke’s voice isn’t always clearly intelligible. But that ambiguity leads me to all sorts of impressionistic speculation, and for that alone, the disc is worthwhile.

Premiata Forneria Marconi - Impressioni Vent'Anni Dopo & Bobo Club 2000 – Being that PFM's Per un Amico ranks among my favorite albums of all time, I had been anticipating hearing a live show around that era — circa 1972 — for quite some time. Both of these CDs released...  (1995) » Read more