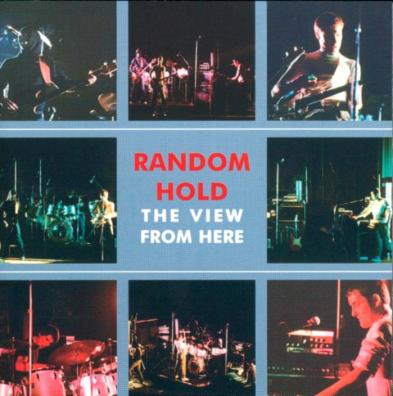 For those of you who missed their brief history, Random Hold was a band that featured David Rhodes (longtime Peter Gabriel band mate) on guitar, Bill MacCormick (Quiet Sun, Matching Mole, and so on) on bass, Peter Phipps (much session work including Gary Glitter and XTC) on drums, and David Ferguson (who has worked with Peter Hammill and others) on keyboards. Peter Hammill produced a number of recordings for them, including all of the studio tracks on this compilation. The band’s recorded output is a bit confusing, with the same songs showing up on multiple releases. Voiceprint has collected all the songs from the self-titled debut EP and the Etceteraville album (both 1979) and the 1980 album called The View from Here, plus two others. The style is a cross between Eno’s early non-ambient albums or Phil Manzanera’s 801 and the kind of artsy stripped-down rock of early Talking Heads. The music tends to be on the simple side, relying on minor keys, dissonance, and a somewhat mechanical delivery, in combination with angst-ridden vocals, to set the dark mood. Included are all the band’s best tunes, like “Meat,” “Montgomery Clift,” and “Silver Spoons.” As an additional addition, nine live tracks are included from a show in Philadelphia in 1980 when the band was opening for Peter Gabriel. The playing on the live recordings is energetic and a little ragged, and the sound quality is not quite up to the clarity of the studio tracks, but worth hearing for contrast.