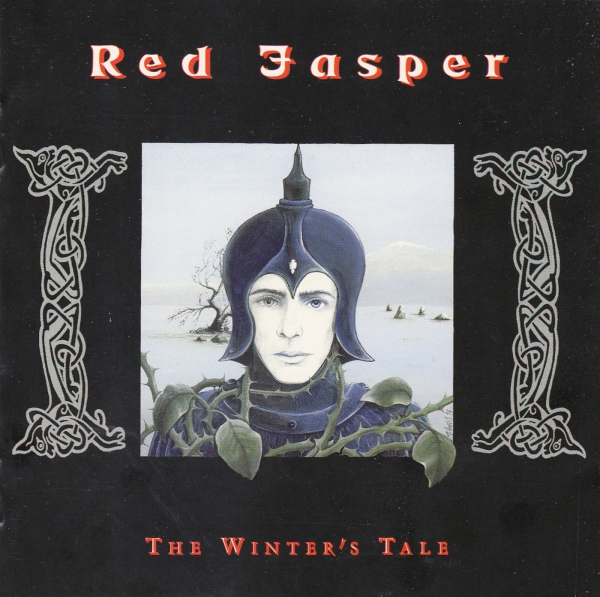 Hard on the heels of their fourth album A Midsummer Night's Dream, this latest offering from England's Red Jasper appears to be, conceptually at least, a companion piece to that album. The basic style of its predecessor remains intact, a combination of Gothic styled neo-progressive in the vein of Asgard and Marillion's darker moments — with flashes of Tull and Ghosts era Strawbs, and a more acoustic-folk based sound with prominent mandolin, not unlike the early efforts of Horslips, with a touch of early Strawbs — that comparison keeps coming up due to lead vocalist/mandolinist Davey Dodds, who sounds much like a cross between Fish, Peter Hammill, and David Cousins — in short, a voice that folks will either love or hate by the time the last track closes. There are few harmonies — Dodds tends to single-voice everything, and unlike the last album, the better part of the music here is of the plodding neo-progressive type ("Bread & Circus's," [sic] "The Night Visitor," and "The Shamen's Song" typify this tendency), while the bright and energetic acoustic folk tunes are fewer or relegated to intros or parts of the instrumental breaks. Many of the rougher edges that gave the previous album character have been smoothed or smothered. But when they decide to get serious about what they do best, the results are splendid. "Shepherds Revels" [sic] and "Ship on the Sea" both exhibit the band's best pure folk tendencies, while "Dark Room" — a hard rocking vocal track — seems to bring the best of both sides of their sound together, if one can tolerate the simplistic boom-bash drumming in the louder passages. "The Scent of Something" begins with a nice mandolin intro, adding layers of piano, keys and guitar as the song builds to a more powerful rock approach with a slight metal inflection, returning later to a more symphonic interpretation of the early verses. In short, when a band has a split personality, it's important to maintain a consistent balance. With this album, the aspect of their sound I personally like best has taken a back seat in favor of a their more heavy neo-progressive side. Still, I'm sure many will enjoy this — and some may like it better.

Evidently you don't have to have a shred of originality, talent, or musicianship to be an active part of the SI (sonically insipid) band roster. Red Jasper continue on in the fine SI (simply insulting) tradition of thoughtless, uninspired neo-prog with this new release. The five-piece lineup of vocals/guitars/drums/ bass/keys plod along predictably through ten long cuts, most of which are so dreadfully slow and rudimentary they seem to last forever. Lead vocalist Davey Dodds does his best Geoff Tate (Queensryche) impression, but has no genuine dynamic control or emotion in his voice. The drummer can find two and four no problem, but can't do much else. The bassist does his best to keep up with him, and the keyboardist clearly marks the beginning of each measure by changing chords like clockwork. Get the picture? The guitarist is the only plausible musician in the bunch, but his copycat Rothery style is so trite and tiresome. The only mildly interesting thing about Red Jasper is the tinge of folk they occasionally drop in with mandolin and pennywhistle, but even that doesn't satisfy. And once again, the mind reels back to Spinal Tap's Stonehenge, a vastly superior musical endeavor. SI is the leading prog label (in terms of sales) and sadly this kind of rubbish is misrepresenting progressive music to the rest of the uninitiated listening world. Die hard fans of SI's stuff will most likely enjoy this album nevertheless. But if you aspire to genuine quality in your music, then run away. You won't miss anything except a good laugh.

More three-four chord neo-progressive? Have that craving for shrill digital patches and maybe, just maybe another vocalist who got locked in a room full of old Marillion records? Well, not exactly — Jasper's fourth CD in a few years is another in their neo sympho sound in a folk format, a hybrid of a slightly different nature than you'd expect. I guess you at least have to give them that, nobody's really tried the Marillion/Fairport Convention combo quite like this. Straightforward, accessible, and certainly an SI release, The Winter's Tale will likely appeal to many fans of the genre as there much familiarity here — the Wall era Pink Floyd effect (the overbearing feeling of depression), the cop to "Starship Trooper/Würm" in "The Scent of Something," the post Gabriel/Hammill angst with the Ian Anderson twist, you name it, it's definitely here. But then there’s the jig-a-jig mandolin-led trad feel that Marillion songs never came close to (the Jester was much too depressed) which make you want to kick up your feet and yell "HEY!" in the vein of Fairport, Horslips, Spriguns and accidentally Malicorne, Stivell, or Gwendal. I think its the heavy metal guitar BOOM-BAP rhythms that make me wince in 4/4 that make me barely take notice or the guitar-solo-over-three-chord jams. Thankfully they only give one go at a single ("Virtual Reality" last time — "Dark Room" this time) which is relieving, but I really doubt this will do it for too many; "Simply" is very appropriate.

However - Calling – Anyone who owned the original LP of this (on Cuneiform) and got to know it well will be initially shocked by this CD reissue. Indeed, However has taken great liberties with the reissue of this, their...  (1996) » Read more

Bruno Heuzé - Eurasie – Heuzé's stunning electro-acoustic music belongs in the broadest swath of progressive music and can be roughly categorized as techno-tribal, an eclectic mix of eastern exoticism, ambient and...  (1996) » Read more

David Thomas & Ronnie Gunn - The Giants Dance – I guess at some point anyone even remotely connected with Genesis will come out of the woodwork to market their offerings. Case in point. David Thomas and Ronnie Gunn were two musicians who apparently...  (1997) » Read more

Kampec Dolores + Grencsó István - Koncert! – After seeing the name Kampec Dolores around for several years, I finally get to hear them. While I’m still unfamiliar with their studio work, I’m happy to report that they put on an...  (2004) » Read more

Flood - Tales from the Four Seasons – Flood is a one man band who plays all the instruments (acoustic guitar, keyboards and clarinet, among others) on this CD which gives us four tunes, one for each season. The entire CD is a tranquil...  (2011) » Read more

General Mojo found a piano in a park...