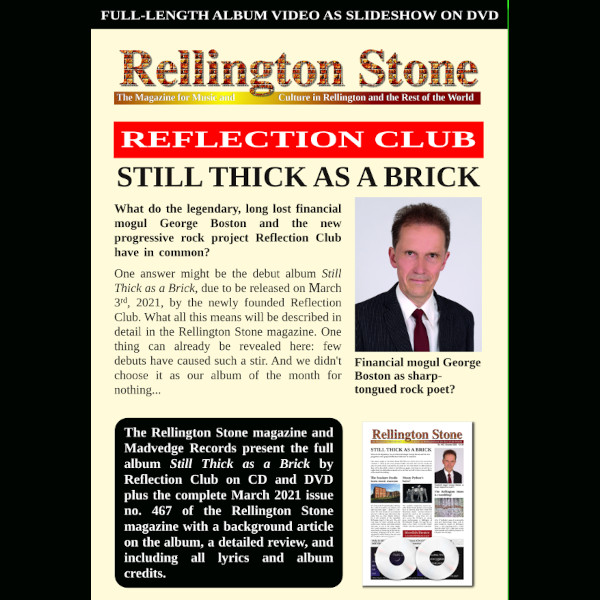 It is always quite risky to attempt covering or copying an iconic group or album, in this case Jethro Tull’s 1972 groundbreaking masterpiece Thick as a Brick. So I cautiously approached the Reflection Club’s Still Thick as a Brick. To provide a bit of background, Lutz Meinert of the Berlin psych group Margin (keyboards, bass, drums, percussion, and backing vocals) launched the Reflection Club in 2017 with German bassist Nils Conrad (Crystal Palace, For Your Pleasure), American flautist Ulla Harmuth, and Engliish singer, acoustic guitarist, and flautist Paul Forrest (Jethro Tull Experience, Dayglo Pirates). They immediately began work on their debut album, Still Thick as a Brick, which took four years to assemble, record, and release. Similar to Tull’s original, this new album is one long composition divided into eleven parts, referencing at times themes or lyrics from the original and expanding upon it with elements of jazz and prog fusion. The most fascinating aspect of the Reflection Club is that Paul Forrest sounds remarkably like Ian Anderson, both in tone and phrasing. Obviously the entire band has studied Jethro Tull and have created what could be considered a long lost Tull record. Though not as groundbreaking as Tull’s 1972 album, Still Thick as a Brick is amazing. And if the music is not enough, the album comes housed in a hardback 74 page glossy covered book, that contains articles from Rellington Stone - The Magazine for Music and Culture in Rellington and the Rest of the World. The book contains the song lyrics, bogus music and concert reviews, band background, and adverts. And then there is the accompanying DVD with a stock art image slide show that supports the music and you can choose to display the sub-title lyrics in the language of your choice. So the Reflection Club took a risk and they beat the odds. Still Thick as a Brick is well worth your attention.