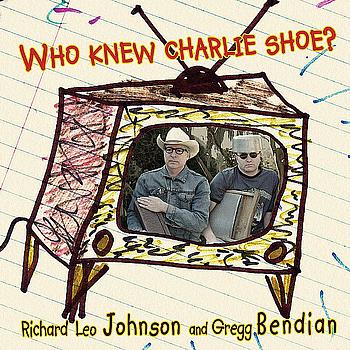 Guitarist Richard Leo Johnson has again created a mythical context for the material on this latest disc, a story about a young boy who was transfixed by an old guitar-playing hobo at a church social picnic, and followed by pestering his folks until they bought him his own guitar, which he promptly teaches himself to play. RLJ plays the 20 pieces here on half a dozen vintage guitars in a fingerpicking and slide style that fully embraces down-home Americana, and a classic concertina. He is joined by percussionist “Junk Fish” aka Greg Bendian. Percussion in this case means washboard, spoons, blocks of wood and metal, pots and pans, plastic jugs, sheet metal, hub caps, and… well, just about anything within striking distance. The songs are brilliantly supported by sound effects, phone calls, bits of radio, barking dogs, and other field recordings that bring the story to life, but not in a way that forces the story – it just helps set the mood for what they are trying to accomplish, and doing it amazingly well. All taken, this is an outstanding release that hits the mark on many levels – as an explorative guitar album that offers a unique perspective (occasionally reminiscent of folks like Carl Weingarten, or early John Fahey), and also as a storybook development for Johnson’s concept. Superb on every level.