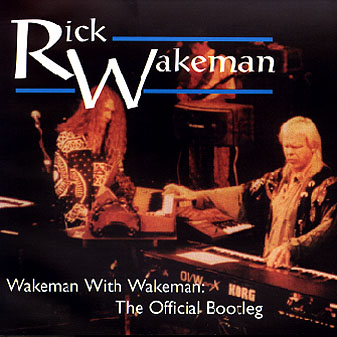 Straight from the mixing board on their recent mini-tour, Adam and Rick Wakeman have released this lengthy 2CD live set. The material ranges from classic Rick (Six Wives, Journey, King Arthur) and recent W+W studio material to covers of Beatles and Stones tunes, all of which has been very well recorded and produced to yield a sound quality far beyond what we normally associate with the term 'bootleg.' Backing musicians Tony Fernandez and Alan Thomson (electronic drums and bass, respectively) provided the live rhythm section but this set is obviously a synthesizer orgy and rest assured there's enough synth here to drown in. Adam and Rick light it up with all modern gear and techie-types will pick out the trademark Roland JD-800/990 and Korg O1W/WS/T1 patches easily, especially the electric guitar lead sounds. Rick once prided himself in always using his own sounds (never factory presets) to create his own identity, but that notion has dropped by the wayside for this tour, perhaps due to the haste in which it was thrown together. Adam and Rick work well together, in fact so well that you can never be sure who is playing what parts, but it would be nice if the young Wakeman can find his own identity rather than follow in his dad's footsteps. Musically, all the typical Wakeman flourishes are here: rapid 16th note arpeggios, Bach-like motifs and embellishments, and the always corny honky tonk blurb. Unfortunately the music always draws from the same set of predictable and limited classical influences, and if you've heard it once you've heard it a thousand times. Rick has always had better technique than taste in writing and with two discs of two Wakemans, that adds up to about three too many. The whole package is overkill, plain and simple. Recommended only for die-hard Wakeman freaks.

Red Jasper - A Midsummer Night's Dream – From the acoustic guitars and tin-whistle that open the first track, I knew this wouldn't be your standard SI neo-prog fare. Vocalist Davey Dodds picks up about a minute in, with a deep and thick...  (1994) » Read more